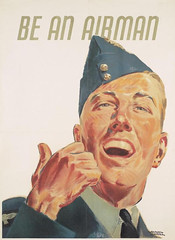 The Federal Aviation Administration may ditch the word “airman.” The FAA doesn’t use the word casually — it’s the agency’s official term for aviators, pilots, and aircrew members, and appears in all FAA regulations and documents. Changing it is a big deal — and I’m all for it. You can argue all day that “airman,” like “mankind,” technically applies to both genders, but the fact is half the human race says bullshit to that, and how aren’t “aviator” and “humanity” far better?

The same report says the FAA may also retire “cockpit,” replacing it with “flight deck.” That would make sense if cockpit meant “the place where people with cocks sit to control aircraft.” Which it doesn’t and never did. Cockpit was first used in the 16th century to refer to a pit or enclosed space for cockfights; expanded in the 17th century to include ships’ below-decks steering compartments; expanded again in the 20th century to include operator compartments in aircraft and racing cars.

But yeah, it’s got cock in it, so in the spirit of dumbing everything down I guess it has to go. I don’t see “flight deck” working for general aviation aircraft or military fighters, though, and while the FAA may disappear cockpit from its lexicon, aviators and aircrew members will keep right on using it.

One has to wonder how long it’ll be before the U.S. Air Force follows suit. Officially, USAF members are airmen, and “airman” is a specific enlisted rank. If you don’t count the Coast Guard, the Air Force is the most woke military branch, yet its collective noun is the most sexist. Soldiers and sailors come in all genders and ranks. So do airmen, but with that term you’re right back to that “well, technically it applies to both men and women” bullshit. Still, I’m having a hard time thinking of a replacement for airman, one that reflects the parent service and mission the way soldier and sailor does.

I suppose it’s a bit much to hope for respectful suggestions, but does anyone have one?