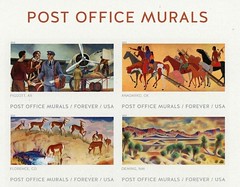 Stamps: still a necessity around these parts. Most of our transactions are electronic, but some bills get paid the old-fashioned way, and more than a few of the older sewing guild members Donna corresponds with don’t know email from cryptocurrency. As HOA president I sometimes send letters to homeowners who violate association rules (I got tired of people telling me they never got my emails — official-looking letters are harder to ignore).

Donna says no one looks at the stamps on envelopes they open, but I do. The stamp on the envelope sends a message, and a fun stamp on a non-fun letter is a non-sequitur. Our stamp folder contains USPS forever stamps with working dogs, NASA sun photos, Christmas trees & stockings, and dinosaurs. Nothing vanilla or generic, and I need to get some for those HOA letters I send out. Fun stamps are great for the letters I exchange with my pen pal back East, though. I heard about the wonderful WPA post office mural stamps you see in the thumbnail and asked Donna to pick up a sheet, but we missed the boat. They’re no longer available. People are selling them at inflated prices on eBay, so I guess we’re not the only ones who wish we’d bought some when they were still in stock.

Our monthly yard guy was here this morning. We usually chat when he’s done and it’s time to pay up. Today he told us he and his wife got COVID from their kids and the whole family’s now getting over it. They weren’t vaccinated but are scheduled to be — after they wait out the CDC-recommended 90-day post-COVID recovery period, that is. Damn. I had lunch with a friend last week and among other things we talked about getting together for dinner with our wives. I assumed he was vaccinated and didn’t ask. Shame on me. Before we agree on a time and place for dinner, I need to. We’re vaccinated and aren’t worried about catching COVID, but at the same time feel it’s too early to let our guard down.

Speaking of which, are you seeing more and more social media alarmism over vaccinated people getting COVID? I’m certainly noticing it. Mostly, it consists of short anecdotal posts like this:

Two vaccinated friends had a couple over for dinner. Assuming they were vaccinated, too. They weren’t. Now all four have COVID. Ugh, please get vaccinated. To protect you and others.

My bullshit flag is waving. If you’re fully vaccinated, the odds are very slim … less than 5% … that you’ll contract or be able to pass on COVID, even the Delta variant alarmists want to frighten us with. In the unlikely event you do get it, you’ll probably be asymptomatic; i.e., you won’t get sick. I’m not the only one wondering what’s motivating the fear-mongering. Here’s what journalist Amanda Marcotte said on Twitter:

Ugh, seeing a lot of people trying to imply the vaccines don’t work against the Delta variant. I don’t know why people are so eager to return to lockdown, but they’re misleading people. The MRNA vaccine is very effective against Delta.

As to the collapse of the condominium in Miami, is anyone surprised to learn engineers and safety experts had warned of a potential collapse years before? There almost always are such warnings, about buildings, airplanes, railroad tracks, highway bridges, electrical grids, dams, and power plants. It’s not that decision-makers ignore warnings. They know about them. But they also think about what acting on those warnings will cost, and what the odds are that predicted failures will ever come. Profit trumps safety every time.

Remember the F-16 crash I wrote about recently, where the pilot died when his ejection seat failed to automatically deploy the parachute? There was a known failure mode in the type of ejection seat installed in that pilot’s aircraft, the ACES II seat manufactured by Collins Aerospace. At least one other pilot had experienced that failure mode, but luckily survived. The Air Force had imposed a time compliance tech order to fix the problem in hundreds of ACES II seats, which are used in various types of fighter and bomber aircraft.

When the seat in question was due to be fixed, a year or so before the crash, parts weren’t available and the Air Force deferred TCTO compliance until the next cycle, three years down the road. Which never happened because the young lieutenant pulled its handle before the three years had passed.

Oh, and guess what? The TCTO has yet to be competed. Some of my sisters and brothers are sitting in faulty ACES II seats today, not knowing the pyrotechnics meant to separate them from the seat and deploy the chute after ejection aren’t going to work, and that they’ll have just a couple of seconds to figure out what’s going on and pull the emergency manual release handle themselves.

With military decision makers, what trumps safety and lives isn’t profit, but cost and inconvenience (i.e., having to explain to the four-star why you’re grounding the fleet to perform a TCTO). Same fucking results as in Miami, though. Shit, now I’m feeling all stabby. Oh, well, it is Monday.

Cheer up, here’s a roadrunner checking out the birdbath. Meep meep!

4 thoughts on “Fun with Stamps”