One Lump Space or Two? 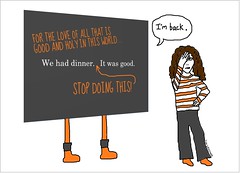 The debate over whether to use one or two spaces between sentences was over several years ago. Almost everyone, in this proportional font digital media age, now uses a single space.

I grew up with the two-spaces rule, which I learned in high school typing class. When I started writing for websites and blogs in the mid-1990s, I kept typing the way I always had, not switching over to single-space sentence breaks until around 2015. If you look at posts I wrote before then, you’ll see two spaces between sentences.

I’m currently revising and updating recipe posts on my cooking blog, Crouton’s Kitchen, inserting a line of code that lets users print out the recipe section of each post — ingredients and instructions — while not wasting printer ink on non-essential paragraphs and photos. My newer recipes have the embedded code; I’m gradually adding it to the old ones. And as with this blog, the older recipe posts on that blog are from my two-spaces past.

It seems the blogging platform I use, WordPress, no longer knows quite what to do with two spaces between sentences. In older versions of WP, what you typed was what you got. Somewhere along the way, though, WP changed its default to a single space between sentences, so when it sees two it inserts a hard space, which can screw up the left margins of your text. Is it worth the trouble to hand-replace all those two-space sentence breaks with single-space breaks? No. Hell no.

I suppose, if Fox News was into typographical conventions, they’d go on a culture war bender about liberal cancel culture and how George Soros-sponsored blogging and social media platforms have outlawed the beloved patriotic American double-spaced sentence break we were taught as children, along with incandescent light bulbs, lead toothpaste tubes, and smoking in public places.

Or Dr. Seuss, I guess. Who isn’t being “canceled” at all. Dr. Seuss Enterprises has simply decided to no longer print and sell new editions of six specific Dr. Seuss books, ones that included heavy doses of racial stereotyping, something Seuss himself is said to have regretted in later life. Those six books, at least for now, remain on library shelves. His more popular stuff, the creepy Grinch and Cat in the Hat for example, will remain part of popular culture for decades to come.

I used to write regular columns about book banning and censorship, and probably wouldn’t have given this Dr. Seuss “controversy” more than a passing link. I’m against censorship, but I’m not going to get worked up over a publisher’s decision to quit printing problematic books people have complained about forever, so long as the books aren’t being actually banned. There were and are far worse offenders than Dr. Seuss, although I must admit this political cartoon he published in the early days of World War Two is right up there on the offensiveness scale: 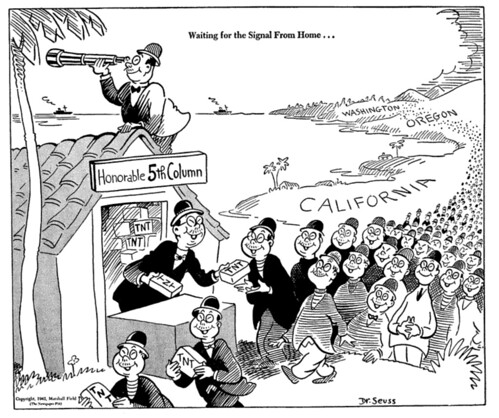 I’ve written things in older blog posts that embarrass and offend me today, but like double spaces, I’ll leave them standing.