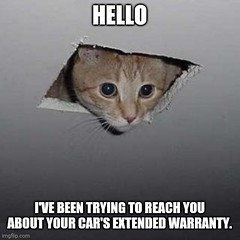 I just dropped the truck off for service at the local Chevy dealership. I pulled out the extended warranty paperwork to leave on the center console in case any repairs were required, but discovered it ran out two years ago — that’s how long it’s been since the last service (we don’t drive it much anyway, and for the last 12 months the truck, along with us, has been sitting at home). Oh well, one less folder of documents to carry around in the glove compartment.

Extended warranties, I’ve come to realize, are like the lottery. The odds aren’t in your favor. Most major failures, if they’re going to happen at all, will happen during the two or three years you’re covered by the factory warranty. If disaster strikes and you need a new engine or transmission later, yes, absolutely, an extended warranty more than pays for itself. But major failures are rare. We paid $1,500 for the extended warranty on our truck, which needed two expensive repairs during the time it was in effect — one to the air conditioning system, one to the electrical system, each costing around $800. The warranty covered one but not the other. We’d have been better off without it. And of course I’ll never forget the lifetime service/extended warranty package the motorcycle dealership talked me into buying for the Goldwing, which turned out to be a blatant ripoff. Folks, extended warranties are a racket, and you can safely ignore those annoying ads, robocalls, and spam text messages.

Donna followed me to the dealership this morning to drive me home. We stopped at Nicos Taco Shop for breakfast burritos on the way home: bacon & egg for me, machaca & egg for her, hold the potatoes on both. A treat for us both. As noted, we don’t get out much — but that’s about to change.

We’re scheduled for our second doses of the Pfizer COVID vaccine a week from today. A hashing friend from our Honolulu days, Marlene, along with her S.O. Mike, is stopping by for dinner and an overnight stay on April 2nd, en route from her Oregon home to a dude ranch west of here. Donna’s sister Georgie and her husband Don will arrive the next day or a two-week visit, during which we plan an excursion to the Grand Canyon. We’ll grab Mister B and hit the road to Las Vegas to see our son Gregory, daughter-in-law Beth, and grandson Quentin in late April or early May. The vaccine is the timely intervention that will make all this possible. Marlene and Mike have had their shots already; we’re hoping Georgiana and Don will be able get theirs sometime this month (but if they don’t at least they’re coming by Amtrak, on which they’re booked a private compartment to avoid exposure to too many strangers); Gregory should be good by then, and Beth, a teacher, has already had hers. Quentin probably not, but we’ll drive to Vegas and won’t bring any of those airport & airliner cooties with us. Yes, there’ll still be some risk, but we’re confident enough in the vaccine to start easing back into seeing friends and family.

Last week saw the passing of two family members, Donna’s Aunt Joyce and my sister Mary’s mother-in-law Glenice, both in their 90s. This morning we learned of the death of a Tucson friend, Carmen, a much younger woman who was taken by the coronavirus. At my age (74), I could probably include a paragraph like this in most blog posts. I promise not to, but make an exception here, because at different times in our lives we were close to all three, and will miss them.

But of a jump here, but it seems to me if President Biden and Democrats in the House and Senate really want a $15 federal minimum wage included with the relief act making its way through Congress, they could easily — and damn well should — make it happen. I’m afraid they’re going to let a lot of promises slip away and use Republican opposition as an excuse (which may have been their plan all along).

But hey, Joe Biden, you don’t need anyone’s approval to commute Reality Winner’s prison sentence, so how’s about it?