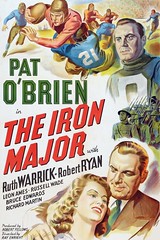 “Iron Major,” in addition to being the title of a 1943 movie, is military lingo for an action officer on a command staff. Iron majors collect information, conduct research, analyze data, write reports, and keep their colonels and generals out of trouble. You don’t have to be a literal major to be an iron one; it’s a matter of position and attitude. My iron major days were in the 1980s, when I was on the joint staff at US Readiness Command and US Special Forces Command (and, in fact, a major).

The most important lesson you learn as a staff officer is how to get things done: navigate the bureaucratic maze, establish working relationships with fellow action officers in other directorates and commands, get past gatekeepers who want you to go through channels. You don’t forget that stuff.

When neighbors began ragging me, as our homeowners’ association president, to get the gas company to honor its promise to replace crappy temporary street repairs with permanent fixes, something they seemed in no hurry to do, my inner iron major woke up from a long hibernation. I researched, found the right guy (the manager of the subcontracting firm that did the digging and road repairs for the gas company), end ran the system by contacting him directly, and voilà … the work is done. Before & after:

As if that isn’t enough of an accomplishment, I made another loaf of bread. Our 30-year-old bread machine quit working and we don’t want to waste money on a replacement, so I’ve started making bread by hand, using an easy no-knead dough recipe and baking round loaves in a hot Dutch oven. As you can see, the results pass a discerning critic’s sniff test.

I’m taking our kitchen helper on a library run later this morning. Donna’s devouring C.J. Box’s Joe Pickett mystery novels as fast as I am, the first time since Lee Child’s Jack Reacher novels we’ve read a series together. Which is great … we’ve been watching too much TV, but these days who isn’t?

Sad news. Donna’s Aunt Joyce died two days ago. She was 91 and the last Giustina of her generation. We will miss her.

Joyce was, for the last 20 years, the matriarch of the Giustina family; the torch has passed to Donna’s generation and will be shared by Donna and two cousins her age. All three learned to make gnocci at Aunt Joyce’s side, so the family remains in capable hands.