Our Thanksgiving dinner-in-a-box was pretty good. Good value, too. 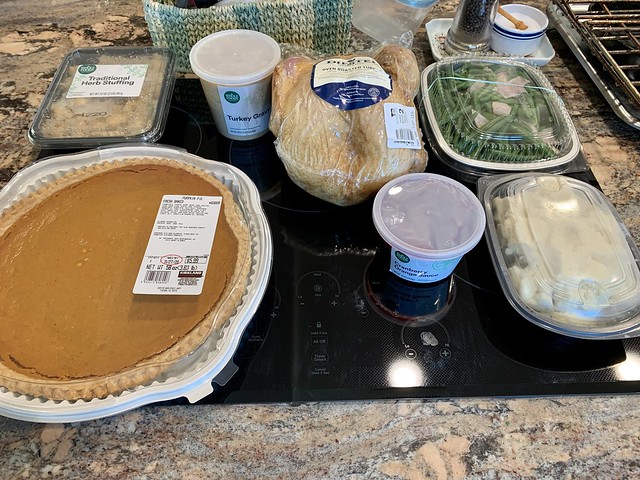 The Costco pumpkin pie was ready to eat, but the traditional Thanksgiving dinner from Whole Foods (turkey, gravy, stuffing, cranberry sauce, mashed potatoes, green beans with shallots) had to be reheated in the oven and on the stove, so ease-of-preparation notwithstanding, we still wound up with a trashed kitchen. Know what else still comes with a to-go turkey dinner, though? Leftovers, and plenty of them!

Dad had to go away on temporary duty one Thanksgiving when my sisters and I were very young. Military bases offer holiday dinners to dependents whose sponsors are away (well, they did then, and I hope still do), so that year Mom took us all to the base chow hall for turkey with all the fixings. We loved it. Yesterday’s takeout Thanksgiving was a similar success, and I bet we’ll be doing it again.

Next on our culinary list is our anniversary dinner on December 2nd. We were going to get takeout from a favorite Italian restaurant, but I checked the website and the dinners we love are no longer on the menu (thanks, COVID). Well, I can always grill steaks, so we’ll have a proper celebration one way or another. Christmas? Not ready to think about that yet … not dinner, not presents, not decorations. Whose idea was it to put two huge family holidays less than a month apart, with a wedding anniversary sandwiched between?

We’ve been waiting for a heavily-advertised HBO series to drop, and yesterday it did. “The Flight Attendant,” we assumed, would be an aviation thriller. Aviation thrillers always suck us in, from the classic “The High and the Mighty” to “Air Force One” to Amazon Prime’s more recent “7500.”

Nope. It’s about an alcoholic flight attendant who can’t make good choices if her life depends on it, and you know right from the first episode she’ll eventually redeem herself because she’s blonde and pretty. Shit, at least an airliner full of terrorized passengers rode along with Denzel Washington’s drunk ass in “Flight.” Little Miss Vodka-Breath here could be a doctor or a television news anchor for all the difference it would make to this story.

I hate shows where lead characters are defined by drug or alcohol addiction. Watching them makes me twitchy and stabby. Perhaps if I hadn’t been a drunk myself I’d be more understanding. This is one series I won’t finish watching.

I assumed references to “Diaper Don” on Twitter meant long-standing rumors of presidential incontinence had been confirmed, but apparently they are in reaction to last night’s tiny desk temper tantrum. Or, as The Guardian puts it, “The hashtag #DiaperDon swiftly trended on Twitter, with people mocking the president as an infant banished to the children’s table for Thanksgiving.”

Today, Trump is accusing Twitter of fabricating the #DiaperDon trend and calling for revocation of a law that shields social media platforms from libel suits over comments posted by users. Which makes him look even smaller, if that’s possible.

The tiny desk, by the way? It’s a White house fixture, often used by presidents signing executive orders and landmark legislation into law. Here’s President Obama at the same desk ten years ago.

Funny how that desk doesn’t look so tiny when real presidents sit behind it, huh?

One thought on “The Children’s Table”