I normally start my days bright and chipper, but this morning I learned a cherished belief, that breakfast is the most important meal of the day, is marketing hype foisted upon us by breakfast cereal magnates in the 19th century. Took the wind out of my sails, that did.

It’s clear by now the Trump administration has no plan to deal with the coronavirus pandemic and no inclination to develop one. That would require a humanitarian impulse, not to mention work and money; hence, the now-official national policy of achieving “herd immunity.” You’d think realizing they’ve left us to sink or swim in a sea of COVID-19 would be a bigger blow than learning breakfast is a lie, but I never expected Trump and the Republicans to lift a finger for anyone but themselves, whereas the other … well, it was one of the last hopes to survive adulthood, and like Santa, the Easter Bunny, and God, it’s now gone.

I still cling to Hallowe’en, though, and I’m not letting anyone rain on that parade, not even Mister B, who deliberately took bites out of each of the pumpkins we carved over the weekend. 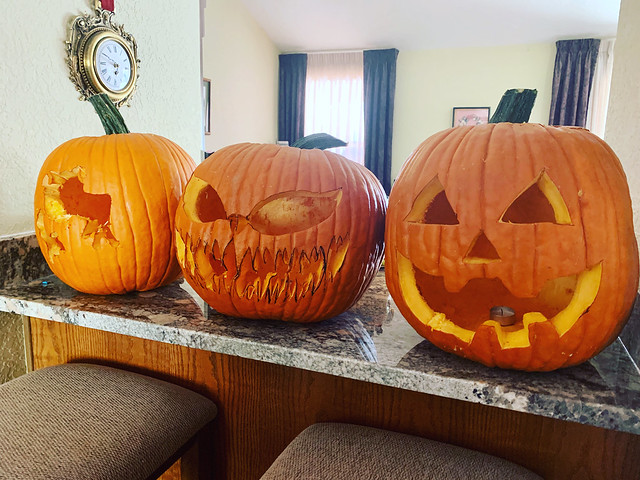 You see them here up on the wet bar; they were on the floor in the entryway when the dog got at them, where they’d been taken in for the night lest neighborhood wildlife eat them. They’ll stay on the wet bar until Hallowe’en night, when we’ll light them and put them out front as a signal we’re receiving trick or treaters. This year, of course, we’ll answer the door wearing masks of our own.

Some of my friends now believe Trump never had COVID-19, that his brief stay at Walter Reed was a campaign stunt. I’m not there yet, but am deeply suspicious. Who else has had such a quick recovery? Not anyone I’ve heard about, certainly. But we did see him struggling for breath on the White House balcony after his release, and then, just two days ago, he was seen and photographed boarding Air Force One through the lower hatchway, the same one he ridiculed Obama for using on a visit to China in 2016. 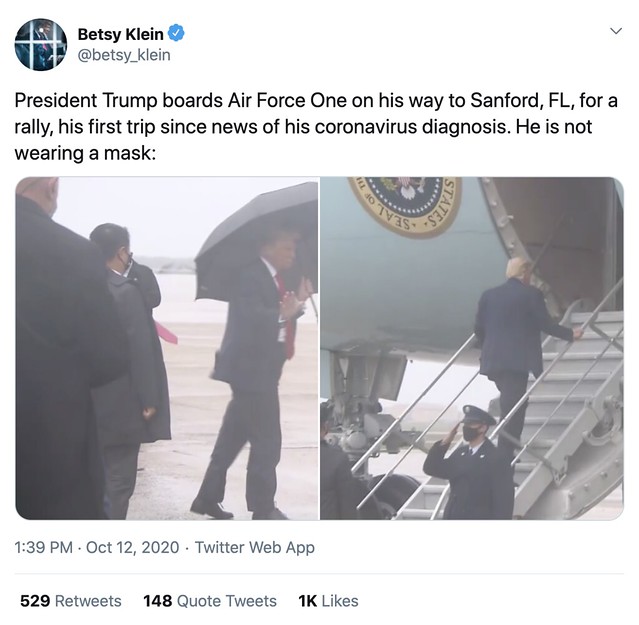 The reason Obama used the lower hatch and built-in stairs at Beijing is that the Chinese wanted to insult us by deliberately failing to provide the extra-tall portable airstairs needed to reach the normal hatch on the Boeing 747’s passenger deck. I’ll just note for the record that in the photos above, Trump is boarding Air Force One at its home station, Joint Base Andrews, where they absolutely do have, and normally use, those portable airstairs.

It’s a long, steep climb up the portable airstairs to the middle deck of the 747. Any bets on whether there’s an internal service elevator between Air Force One’s lower forward compartment and the upper passenger deck? I have a lot of questions about Trump’s miracle three-day stay at Walter Reed, but I think he had (and still has) something, and that he’s struggling with a climb he’s made many times in the past.