“She awoke with renewed certainty that Carl Jung was full of shit.”
— Carl Hiaasen, Squeeze Me (Skink #8) 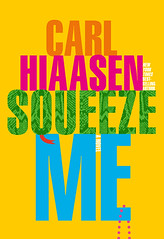 Squeeze Me (Skink #8)
by Carl Hiaasen

I dunno. Carl Hiaasen used to be one of my favorites, but his recent novels seem awfully light. Carl’s schtick is to infuse specificity and detail into an almost endless series of wacky incidents, some plot-related, some thrown in just for fun, like this: “Jack Bogsworth was decapitated in mid-sentence while arguing with a former spouse on an iPhone in the driver’s seat of his 2009 convertible Corvette while driving on Interstate 95 by a flying miniature dachshund which had been furiously flung from the cab of a passing White Freightliner by a one-armed hooker named Maude who’d been picked up by the truck driver at a freeway rest area 50 miles north of Miami, who was angry with the dog for chewing a hole in her knockoff Gucci purse.” The schtick is getting old. As is Hiaasen’s habit of giving all but his most sympathetic characters extraordinary deformities, impediments, or personality disorders. Hiassen’s novels are populated with mental and physical mutants to an extent you would never see outside of an institution. I’m not saying Hiaasen isn’t a fun read, just an increasingly inconsequential one. It’s probably me. I suspect that if I were to go back and read an earlier Hiaasen novel, one that I particularly enjoyed (like Strip Tease), I’d find it very similar to Star Island — light, contrived, cute, filled with freakish characters. My tastes have changed; I want more meaning.

Carl, all is forgiven. You’re back in form with “Squeeze Me” (Skink #8). True, the elements I poked fun at in my earlier review are all present: the wacky incidents, the specificity of amusing detail, characters with extraordinary deformities and personality disorders. This time, though, the signature Hiaasen touches are woven tightly together to support a genuinely interesting and topical story that probably doesn’t even get at half the shit that goes down at Trump’s Mar-a-Lago resort, here not even thinly disguised as Casa Bellicosa. And maybe it’s Angela, a terrific character in her own right, one I wouldn’t mind seeing more of (as in “Further Adventures of Skink” (Angela #2). Hint, hint.

Carl Hiaasen is back, and I for one am delighted. 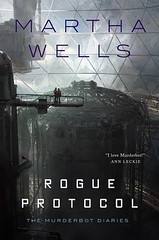 “Rogue Protocol” is another short, fun read, the work of an afternoon. The Murderbot, now going by the name Rin and as engaging as ever, is still looking for evidence to use against the former employer who misused it and caused it to murder humans in a hushed-up incident in a mine. The intricacies of its interactions with the operating systems of space shuttles, various other bots, and entire installations are highly detailed and sometimes almost too much so, but Martha Wells has thought her complicated plot sequences through and narrates them well.

The first four novellas, and a novel-length fifth, make up a continuing story and I plan to read them in order, library availability permitting. Just buy ’em all, if you can afford it, and read them in sequence. 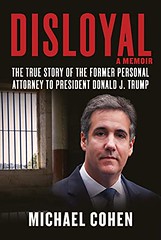 I did not buy the book. My local library had the hardcover with a short waiting list, but to my surprise plenty of e-versions with no wait at all, so I downloaded a Kindle copy. I read it on the strength of a friend’s observation that it seemed to be written out of genuine remorse (unlike other Trump tell-alls) and that Mr. Cohen had a decent ghostwriter, making it readable (unlike yadda yadda).

It is readable. The remorse? Cohen describes how he quickly came to realize what kind of man Trump was. He tells of his growing disdain for, and distrust of, his boss, yet also admits that whenever Trump granted him the least bit of access or proximity he found himself unable to resist the pull. Moreover … again in his own retelling … he relishes (and repeatedly brags about) the dirty work he did for Trump. In the end, he didn’t turn on Trump until Trump turned on him, as he had so many others. It’s impossible to see Cohen’s remorse as much more than resentment over losing access and power.

The tell-all aspect of Cohen’s tale? There’s little here anyone who’s watched Trump in action over the past several years doesn’t already know. The only standouts, to me, were Cohen’s assertions that Trump in fact doesn’t drink (I still have my doubts on that one) and that he’s privately pro-choice (I have my doubts there too, and think it’s more likely he simply doesn’t care one way or another). The rest of Cohen’s revelations on Trump’s bottomless lack of character are unsurprising … we already knew all that. I suspected he was less than forthcoming on many details.

Michael Cohen seems at his most sincere is praising and thanking his wife and children for standing by him through the Trump years and his inevitable downfall, and his one redeeming feature is that he seeks their forgiveness.

Would it be clichéd, cheap, and predictable to say I feel dirtier after reading this than before? People suck, and the suckier ones get sucked in by the suckiest, creating a sucking vortex of suckitude, which those who suck mistake for the high life, and now all of us are circling the drain. 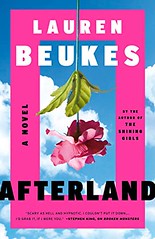 I enjoyed reading South African novelist Lauren Beukes’ “Moxyland,” “Broken Monsters,” and “Zoo City.” These earlier novels covered a wide range: “Moxyland,” a Gibsonesque near-future novel of a South Africa where technology has been applied to repression; “Broken Monsters,” a contemporary police procedural (with supernatural elements) set in Detroit; “Zoo City,” a trip through the underbelly of Johannesburg (with a lovely conceit about “animaled” people, echoing one of my favorite sagas, Philip Pullman’s “His Dark Materials” trilogy).

And now “Afterland,” a post-plague near-future dystopia set in the USA, the plague being a disease that has wiped out all but a handful of men and boys across the globe; a world peopled, run, and governed by women. A not-that-uncommon science fiction scenario, but here well done, tightly plotted, suspenseful, and chilling. Beuke’s world-building is solid and believable; so are her characters, major and minor.

It’s a page-turner. Yes, I’m biased … I like everything Lauren Beukes writes. 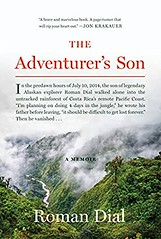 The Adventurer’s Son
by Roman Dial

I put a library hold on this book on the strength of Jon Krakauer’s enthusiastic endorsement: “A brave and marvelous book. A page-turner that will rip your heart out.” Uh, no.

“Peggy’s bravery in the deep water and jungle amplified her beauty and strengthened my love and admiration for her.”

“During that golden age, we shared music and books, swapped interests and insights. And as he grew to know more than I did in economics, genetics, and politics, he shared his knowledge enriching my life.”

The writing is more press release than memoir, artificial and removed. Moreover, everything in the opening chapters is self-referential, as if Dial sees himself as his own public relations department.

In short, the writing alienates me. Nothing like Krakauer. It’s like reading the citation for a military medal award rather than a first-person narrative of the actual battle. 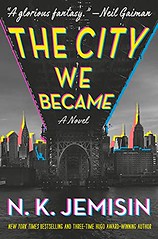 The City We Became (Great Cities #1)
by N.K. Jemisin

I should create a rating category for books I consider to have read without actually finishing them. Usually, when I abandon a book, I’m at most halfway though. With this one, though, I made it all the way to the final 50 pages before bogging down in repetitive expository dialog. I found myself flipping through page after page as one dislikable character after another talked about doing something critically important to the survival of New York City without actually doing a goddamn thing, eventually realizing I no longer cared enough to keep flipping (I’m certain that in the end they finally got off their asses and did what needed to be done).

What was a most promising start and a decent-enough middle ended in a damp fizzle.

Your mileage, as I note from other reader reviews, may vary.