Our remodeling project continues* with yesterday’s installation of new patio doors in the living room and master bedroom.

*I know I said at one time the remodeling project would be done with the installation of these doors, but Donna hopes to replace the rest of our windows sometime next year, so there’ll be no more talk of completion from me.

The dogs and I hid out in the home office while the contractors worked, at least until Donna’s 10 o’clock Zoom meeting, at which point we switched places and I took over monitoring the work from my chair in the family room. God, I love it when we can afford to hire professionals to do the work!

The new doors are great. They slide! They seal! The screens have no holes! About the only thing they don’t do is photograph well, and that’s not their fault. It’s just hard to tell the difference between old doors and new doors in a photo.

I’m about to get dressed and take Mister B for his morning walk, then pick up a library book I put on hold for Donna to read, The Calculating Stars by Mary Robinette Kowal … yes, I’m trying to turn her onto science fiction, if only so we can watch more streaming TV shows together!

Banned Books Week is almost upon us, and I’m already thinking about it in light of Trump’s planned Commission to Promote Patriotic Education, announced yesterday. A historian named Howard Zinn wrote a book titled “A People’s History of the United States” in 1980, a book immediately branded as subversive by American exceptionalists and conservatives in general, and I was not surprised to see Trump mention Zinn by name in his announcement:

“As many of you testified today, the left-wing rioting and mayhem are the direct result of decades of left-wing indoctrination in our schools. It’s gone on far too long. Our children are instructed from propaganda tracts, like those of Howard Zinn, that try to make students ashamed of their own history.”

This seems an appropriate time to repost my 2014 review of Howard Zinn’s “A People’s History of the United States,” and to recommend it to true American patriots, i.e., patriots who care about this country and want to build a better America for all of us. 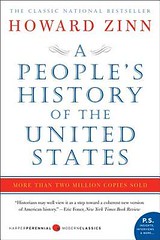 As a child I believed my country was exceptional. That’s what I was taught; that’s what the adults I looked up to believed. Victory in WWII was still fresh and the economy was booming under Eisenhower, at least for white middle class families like mine. When I was still very young my father joined the US Air Force and we began to move around the country. I was exposed to families who were not like the ones I saw on TV, families who experienced a different American reality from the one I was taught. At an age when I was politically aware enough to know segregation was wrong and could not last, we were stationed in Virginia and I was sent to a segregated whites-only school. Shortly afterward I gave up believing in fairy tales and god. I started reading on my own, a habit I never successfully broke. I protested our early involvement in Vietnam, packed clothes and food for the Freedom Riders, helped a friend obtain conscientious objector status, joined SNCC. American history, to me, had begun to look not all that different from the history of any other country.

So it’s no wonder to me why an entire political camp — the American right — rejects Zinn’s book. The history it recounts, starting with the very first chapter (Columbus, the Indians, and Human Progress; a chapter so shocking and disturbing I suspect many conservative readers never progress beyond it, and that you can read right now by clicking on the title, above) is incompatible with any notion of American exceptionalism. Or fairies. Nor is it a wonder to me that many on the American right would attempt to suppress this book, purge it from schools and colleges, and call for it to be banned outright. The attack on Zinn and his book follows familiar lines: the author is an America-hater and a Marxist; A People’s History is praised by Hollywood celebrities, championed by leftists, and taught by subversives; Zinn’s interpretation of history is meant to weaken American minds and pave the way for implementation of United Nations Agenda 21.