I caught a mouse last night. I learned this morning it was actually a rat: a tiny desert denizen called the kangaroo rat. Donna had gone to bed and I was in the family room, reading in my recliner, Mister B sleeping on the couch by my side, when I saw motion in my peripheral vision, down by my feet. It was a wee furry creature with a long tail, brazenly looking for crumbs on the carpet. The recliner is tall and my feet don’t quite touch the floor when I sit on it; it was directly under my bare left foot, lending an element of creepiness to the encounter.

I sat perfectly still and waited for it to go back under the chair. When it did I got up and fetched the trap from the garage. We use a humane trap, a rectangular box with trap doors on either end, the kind where you put a bit of yummy cheese or peanut butter on a hinged tray inside. When small critters crawl inside and take a nibble the doors fall and lock into position. Mister B didn’t wake up as I set the trap and positioned it to one side of my chair. I sat back down, read a few more pages, then heard a little metallic click as the trap doors fell.

Mister B heard that, by golly, and was beside himself as I picked up the trap and took it out into the front yard to let the mouse go. He was restless the rest of the night, knowing he’d missed something fun, and it serves him right for sleeping while an invader disported itself under his nose. Schatzi, our first dachshund, would have been all over it!

This morning I did a Google image search for southern Arizona mice and there was last night’s catch, a Merriam’s kangaroo rat. I knew such critters existed, because on his last visit the termite inspector pointed out their cylindrical burrows in our gravel driveway, about an inch in diameter, from which they emerge at night to forage. They don’t need water; whatever moisture they get comes from the seeds they eat. Oh, and they’re kind of cute, at least when they’re not about to tickle the sole of your pink naked foot. Knowing now they can leap nine feet, I’m glad I didn’t twitch when I first saw it down there. 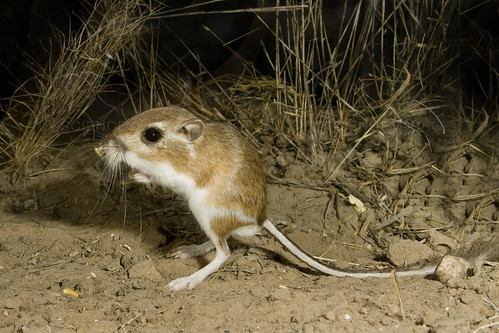 Donna had appointments yesterday and I was on deck for dinner. I made goulash in the slow cooker and served it over thick dumpling-like egg noodles, the closest thing we had to spaetzle. I’m not happy with my food photography, this one in particular, but then again there may not be any way to make goulash look as tasty as it is. 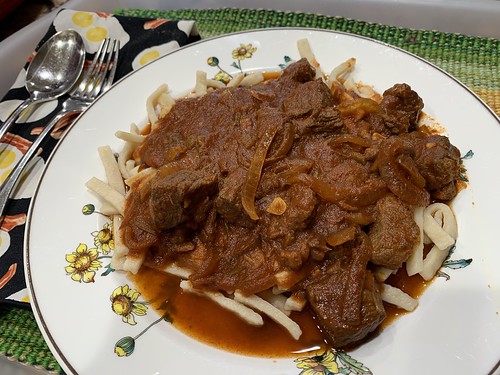 Yesterday’s post, And Mexico Will Pay for It, may come across as harsh and judgmental. It is harsh and judgmental, and I’ve since edited it to make my meaning clearer and dull some of its sharper edges. I was tempted to tone it down even more, but stopped myself. I’ll let it stand. It expresses how I feel in the presence of those who support Trump and today’s Republican Party, because whatever their stated reasons, supporting that man and the party that enables him means embracing racism, amorality, corruption, and contempt for the values decent people were raised to live up to. I will never forget what side people took during the political, social, moral, and now literal plague Trump and Republicanism brought upon us.