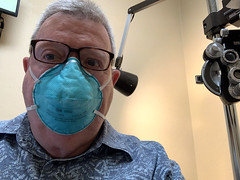 An eye exam’s been on my calendar for a year. I kind of expected someone to call and postpone it, like the dentist did with last month’s cleaning appointment, but no call came and I went in yesterday as scheduled. They were waiting for me.

I’d been thinking I needed new glasses. Nothing gross, just some difficulty focusing while reading or working on the computer, particularly with my right eye. Sure enough, my astigmatism has gotten worse, and I now have a new prescription. Don’t know if the optical department at Costco has reopened or if I’ll have to order glasses on line, but I’m looking forward to seeing sharp letters again.

I’ve known about the astigmatism since my early 20s, when I joined the Air Force. We were living in Montana when I decided to sign up. The recruiter gave me a Greyhound bus ticket to Malmstrom AFB in Great Falls, where I took and passed the pilot aptitude test and a flight physical. Shortly afterward I took the oath and got orders to report to Officer Candidate School at Lackland AFB in Texas. The orders identified me as a “pilot candidate,” which is what the recruiter had promised. Later, when I got to Lackland, they sent me and the other pilot candidates in my class to Randolph AFB for another flight physical. This was the official one. And I didn’t pass.

I’d just finished the eye and vision part of the exam when the enlisted medical tech who administered it said “You’re 20/20 but the astigmatism is disqualifying for flight school … don’t worry, though, you can still be a nav. Next!” He said it in such a casual and practiced way it was clear he delivered the same bad news to other young men on a regular basis. I don’t know how the others reacted, but for me the ground might as well have opened up beneath my feet. I was in free fall.

From the time I first talked to the recruiter in Montana to that exact instant in Texas, as I watched the med tech reach for the red REJECTED stamp on his desk, I’d only pictured myself becoming an Air Force pilot. No other possibility had ever occurred to me. What, not be a pilot? I begged the tech to let me take the eye test again. I don’t know why, but he played along and I’m forever grateful. I got back in line for the eye exam, squinted hard during the astigmatism test, passed, and was back in the pilot training pipeline.

In addition to this, my personal blog, I have a diary page at Daily Kos, where I cross-post most of my aviation stories. Inevitably, I’ll get comments from DKos readers who wanted to be military pilots but didn’t have the eyes for it. It’s true: you have to have perfect vision to get in. Thanks to that med tech at Randolph, the Air Force didn’t learn about my astigmatism and I got into flight school.

The military of course knows that pilots’ vision deteriorates with age and makes allowances. Once you’re in, you can wear corrective lenses so long as they get you back to 20/20 and correct mild astigmatism. I flew without glasses the first 15 years. Once I started wearing them I kicked myself for not getting with the program sooner. I could see better than ever. Glasses gave me an edge in air-to-air, where the enemy is a tiny speck in an ocean of sky and you have to not only be able to see the speck but instantly determine whether it’s turning into you or away, and if there are other tiny specks nearby, enemy wingmen hoping to get in on you unobserved.

Distance vision isn’t the most important thing to me today. I no longer gamble, sin, and drink; these days I ramble, sit, and think.* I get the bifocals they prescribe and keep a pair in the car for driving, but always have a second pair made with just the close-in part of the prescription; those are my readers and I couldn’t do without them. This time I asked for a third prescription, for reading words and numbers on a computer monitor 36 inches away. Cheap drugstore magnifying glasses, fine for computer work five years ago, no longer hack it and I’m tired of blogging in a blur. This time around it’ll be new bifocals in the car, new readers on the table by the recliner, new computer glasses on the desk.

I just remembered another moment from that flight physical in Texas. If you passed everything else, there was one last hurdle: an interview with an actual flight surgeon who’d ask you personal questions designed to to weed out candidates who were likely to wash out for other than physical reasons (of course I figured that out later … I didn’t know it then).

The flight doc was still interviewing the guy ahead of me when I got there, so I sat down on a couch to wait my turn. This was in late 1973. The X-rated movie Deep Throat had come out the year before, and there on the coffee table in front of the couch, peeking out from under a six-month-old copy of Time Magazine, was a photo book titled “The Making of Deep Throat,” filled with black & white stills from the movie. I’d never seen Deep Throat, or any porno movie for that matter. As you can imagine, I was elbow-deep in the book when the flight doc opened his door to call me in. “Hey,” he said, “that’s private.” “I’m sorry,” I said, standing up slightly bent over to hide a most-inconvenient erection. I’m sure he was laughing inside, but he kept a straight face, asked me the requisite questions, and gave me the final stamp of approval.

To this day I love it when people ask if I ever saw Deep Throat, and I get to say “No, but I read the book!”