Friends and I have been swapping news articles about those strange UFO cockpit videos recorded by Navy fighter pilots a few years ago. I wrote about the videos and described a “UFO encounter” of my own in a recent Air-Minded post.

A defense news weblog, The War Zone, has obtained the actual incident reports filed by those Navy pilots. They published the complete reports in an article titled “Here Are The Navy Pilot Reports From Encounters With Mysterious Aircraft Off The East Coast.” 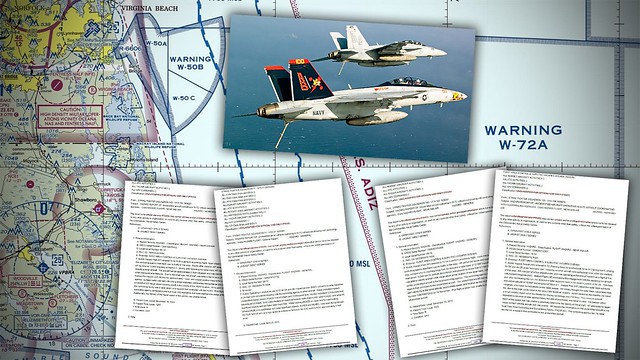 I’m going to quote extensively from the article and the official reports included therein. Here’s the introduction:

The War Zone obtained the eight hazard reports, all of which are marked “Unclassified” and “For Official Use Only,” via a Freedom of Information Act (FOIA) request to the Naval Safety Center. Seven of them involve F/A-18E/F Super Hornets and occurred at various times between 2013 and 2014 in a patch of airspace off the coast of Virginia and North Carolina known as the W-72 warning area. The eighth incidents took place in 2019 and involved an EA-18G Growler flying in a different portion of the Atlantic Ocean off the coast of Maryland called the W-386 warning area.

Here are summary details from each of the eight reports:

Whatever the objects described in these reports were, it seems pretty clear they weren’t flying saucers. Something that may have been an RPV (remotely piloted vehicle), leaving a smoke trail behind it. A quadcopter drone. Several possible weather balloons. One object appeared to be five feet in width, others were “the size of a suitcase.” None of the objects moving faster than Mach 0.1 (77 mph); most described as “stationary.” All of them at altitudes down in the low teens. Not exactly what we imagine when we think about space alien tech.

So what is the Navy’s real concern about these mysterious airborne objects, once you strip away the UFO hype? Here’s what one of the reporting pilots’ commanders had to say:

“I feel it may only be a matter of time before one of our F/A-18 aircraft has a mid-air collision with an unidentified UAS [unmanned aerial system].”

I’ll also quote this paragraph, since I myself flew F-15s out of Langley AFB and used the same working areas as the Navy pilots who filed these incident reports:

[…] according to Langley Air Force Base’s 1st Fighter Wing, which is located very near NAS Oceana and their F-22 Raptors use the same general airspace as the Super Hornets to train in daily, their crews had had not experienced any similar phenomena, or at least were not willing to disclose that they had.

There’s a lot of military aviation activity off the east coast. Those overwater working areas were heavily scheduled when I flew in them; they’re no less busy today. I have to note, though, that along with F-22 pilots currently flying out of Langley, I never saw UFO or “unidentified UAS” activity in W-72. Or anywhere else.

As I said in my earlier post: “So here I am, continuing to disappoint UFO believers all these years later.”

One thought on “Aif-Minded: UFO Letdown”