Stanning in the Shade 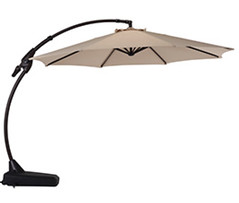 Our old pool umbrella’s shot, so we ordered a new one. I use the umbrella to shade a section of the pool, moving it around as necessary (it swivels at the base). It’s the only way I can log pool time while staying out of the sun … well, except for swimming at night, the way Dracula does it.

I tried to find a replacement umbrella that would work with the base from the old one, but no such luck. The old base is filled with sand and weighs over 200 pounds. Moving and emptying it will be a hard and sweaty job. I’ll dump the sand by the side of the house, then take the old umbrella and base to our friend Mary Anne’s curb. She lives in the city of Tucson, which has bulk garbage pickup the first week of June (we live in the county and they don’t come out our way). Chances are someone will snatch it before the garbageman comes, with an eye to fixing and selling it. A couple of years ago we left a set of old patio chairs in front of Mary Anne’s house. She told us they were gone an hour after we drove away.

Speaking of hard and sweaty jobs, our son and grandson are coming down next week. Greg’s bringing his chainsaw so he and Quentin can cut down two near-dead mesquite trees on the back of our property. The trees are on the far side of our backyard fence, between it and the Catalina Highway. I guess they have to go, but I worry we’ll get more road noise without them, and a whole population of birds will have to find new homes. The lads will have to watch out for two-inch mesquite thorns, javelina, and rattlesnakes. I say “they” because I see my role in the project as supervisory.

Greg and Quentin’s visit will expand the number of people inside our quarantine bubble. The bubble started off small but got bigger. We exchange unmasked visits with a couple of trusted friends  (no hugs or handshakes, though). Our live-in daughter Polly works nights at an Amazon fulfillment center, and god knows what she’s exposed to there, though she says they take all the precautions. I have my motorcycle buddies, with whom I’ve ridden during quarantine. My barber and Donna’s hairdresser are on the edge of the bubble: they wear masks when we visit them. We have a pool guy and a yard crew, but they work outdoors and we stay inside when they’re here. The housecleaning ladies are coming again, every other week, and that’s kind of scary. I make myself scarce when they’re here, and Donna avoids close contact by isolating herself in the sewing room to catch up on orders and projects.

We’re fine with the homebody life, taking precautions with close friends, and masking up in public. We’re not afraid to confess we’re taking some risks, as with the housecleaners. But Christ are we sick and tired of it being the central subject of every discussion, and I am done with it on this blog.

One of my favorite (and one of the best) bloggers, Mimi Smartypants, posted a question to Twitter, and I responded: 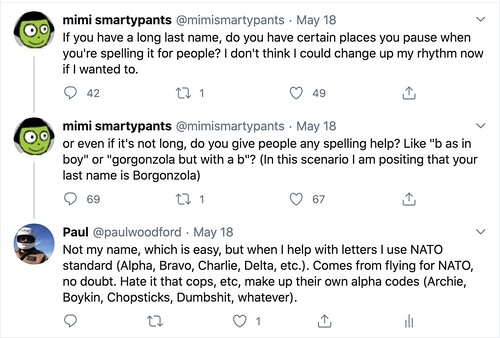 See that little “1” by the heart under my response? That was Mimi Smartypants, liking my tweet. I swoon!

Everyone’s talking about an article published in The Atlantic, Donald Trump, the Most Unmanly President. The author, Tom Nichols, addresses something I first picked up on in December 2015, when I posted this:

Megyn Kelly, during the first GOP debate, mentioned Trump’s long record of denigrating women and asked him why women voters should trust him now. He tried to shut her down but she stood up to him, reciting a list of things he’s publicly said about various women. Trump attacked Kelly on social media afterward, and then went behind her back to Roger Ailes of Fox News, crying about Kelly’s “unfair” treatment of him. Ailes, while publicly supporting Kelly, apparently put behind-the-scenes pressure on her to take an unscheduled 11-day vacation.

The issue, as Tom Nichols frames it, is this: “Why do working-class white men—the most reliable component of Donald Trump’s base—support someone who is, by their own standards, the least masculine man ever to hold the modern presidency?”

Mimi Smartypants isn’t the only woman on Twitter I stan*—Valerie Insinna, an air warfare reporter for Defense News, is another. She doesn’t like the “manly” framing of Nichol’s article. Here’s what she said about it:

Never knew “manliness” was a trait a person needed to be president but thanks, I guess, @TheAtlantic, for bringing that new criteria to the table. There’s an interesting article to be written about how Trump uses the trappings of masculinity to appeal to his base, but the majority of the article that I read was dedicated to pointing out how Trump isn’t “manly.” Like it matters.

Nichols focused on Trump’s masculinity, or lack of it, and yes, it is bewildering that men who see themselves as tough guys worship him. But I agree with Ms Insinna that the focus is wrong. Until a few weeks ago a lot of us, manly men included, believed the Democratic Party would run a woman against Trump in 2020, a woman who would most likely win and become our next president. Matter of fact, the Democrats ran a woman in 2016 and she did win, only to have presidency awarded to the loser by the Electoral College. So maybe manliness isn’t the issue. Or shouldn’t be the issue.

A better way to frame it: Trump doesn’t share the basic cultural and social values the rest of us, men and women alike, were brought up with, values like standing up for friends, keeping promises, not being a tattletale, not picking fights with people littler than us, not going behind others’ backs in cowardly ways, not betraying those who put their trust in us.

We all know this about Trump … it’s not like he tries to disguise his nature. I might have asked myself, back in 2015 or 2016, why people raised to believe in a set of higher values would get behind someone who scorns those values. But I no longer believe Trump’s supporters share the values the rest of us hold in common. Oh, they’ll swear they do … but they don’t. You can’t make exceptions. If you support a coward, you’re not brave. If you support a dishonorable man, you’re not honorable. If you support a racist (I can already hear the screams), you’re a racist.

There has never been a better time to practice social isolation.

2 thoughts on “Stanning in the Shade”