Antifa is short for anti-fascist. I’m one, and so is almost everyone I know. Once upon a time, the whole country was antifa. Somehow it seems important to point that out. 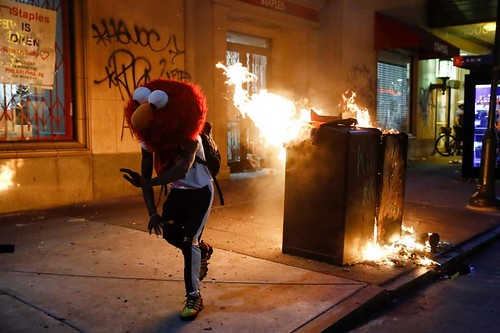 I don’t have much to say about the civil unrest sweeping the country, other than to observe that outrage over police brutality and racism boils over every few years and will continue to do so as far into the future as I can see.

My opinions get less certain every year. There aren’t too many things left I can get on a righteous high horse about, but I do have a few thoughts on policing.

First, here are some sample tweets. There are thousands more, all repeating the same points:

Police forces in some cities and states may have evolved from runaway slave patrols, but that doesn’t explain the universality of policing. Every nation, every society has cops. Of course lives matter more than property, but in reality protecting property is the prime directive of police everywhere, and it’s what societies want. If police forces were disbanded, the citizenry would fund and raise private police forces virtually overnight. Bad people who want to take your shit and maybe kill you while they’re at it aren’t going away; neither are police and prisons.

The US military was a racist institution well into the 1950s. Through leadership, policy, and regulation, the military has managed to get this basic flaw of human nature under control. The military knows it can’t regulate hearts and minds, but it can regulate behavior. If the military can do it, so can the police.

Some might argue that police unions are too strong and will thwart any attempt to change racist policies and behavior. To that I point to the American civil service, which once was corrupt to the bone. In the 1800s, if you wanted a city, state, or federal job, you paid a bribe to get it, and often part of your paycheck. Civil service was a system of political patronage, top to bottom, and the people at the top were even more resistant to change and reform than are police unions today. And yet change did come.

I started following a cop named Patrick Skinner on Twitter after reading a profile of him in The New Yorker (The Spy Who Came Home, April 30, 2018). He’s an advocate for community policing. Cops should live where they work. They should know their neighbors. They should not be militarized, which leads police to look upon citizens as the enemy. They should help. I don’t know if he’s ever argued that cops should literally walk a regular beat, but that’s the sense I get from reading his tweets. Here’s one he posted yesterday:

They’re out there, cops like this. There are police chiefs with similar outlooks and beliefs. They can make a change.

I say I’m less certain in my opinions these days, but here’s one I still hold dear: there’ll be no police reform in cities and states run by Republicans. The GOP represents the bitter last stand of racism. You’ll say I shouldn’t make this about Trump. I say fuck you, I will. Every day Trump remains in office, throwing fire on the flames while cowering in his bunker, the more Republican governors and mayors will resist change; the more emboldened and unashamed racist cops and police unions will become. Before anything else can change, we have to throw him out.