He foresaw the destructive potential of aerial warfare, but boy did he miss the mark on humanity:

It has often occurred to me that perhaps the comparatively new science of aviation will bring the making of wars to an end by reason of the very terrible consequences which will fall upon those nations which, in the future, have the temerity to declare war upon each other.

To think that within a few hours of the declaration of war a dread, whirring noise will be heard approaching the big towns and military centres of the combatants, foretelling wholesale murder and destruction by aerial torpedoes, will surely act as a deterrent against fighting in years to come.

— Torpedoes from the Sky, 4 November 1917, by Clarence Winchester, “the well-known writer on air-craft.”

Not entirely sure why I thought to include this quote on my blog, other than that I often write about aviation and that it reminded me of the visions of other early air warfare pioneers. Pioneers like General Billy Mitchell, who, about the same time Charles Winchester was writing the above words, was dreaming of 1,000-plane bombing raids against German cities.

I like to think I chose fighters, where, had I gone to war, I would have engaged in one-on-one combat with enemy pilots, but my country could just as easily have sent me to fly nuclear bombers, where I would have been on line to do things Mr. Winchester, for all his knowledge of air-craft, couldn’t have imagined in his worst nightmares. And just as I strove to be a good fighter pilot, I would have striven to be a good bomber pilot.

Well, enough dread whirring noise for one morning. There’s an even bigger potential killer on the loose, so stay home, people!

As in: “Don’t be like us!” We busted quarantine yesterday for a walk in Agua Caliente Park. Mister B gave me a good workout, tugging on his leash from one end of the park to the other (I remember walking my parents’ two Irish setters on visits to Cape Girardeau back in the 1970s, and how they nearly pulled me right out of my shoes; no way could I handle dogs that big and strong today). As before, Mister B ignored the turtles sunning themselves on the bank by the pond, not knowing quite what to make of them. 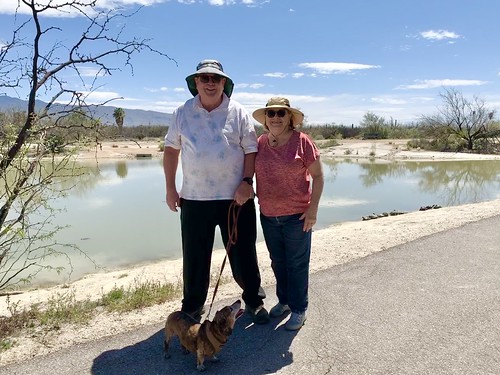 Our friend Mary Anne likewise broke quarantine, dropping off a couple of n95 masks for us to use on trips to the grocery store. They were old ones she’d brought home from the hospital she used to work at; so old the original straps had lost their elasticity. Donna freshened them up with new straps and we wore them today, she to Costco (where she scored paper towels!), me to an appointment with my dermatologist.

I’d gone in for photodynamic therapy in February, basically an induced facial sunburn to kill off the outer layer of skin. It worked: there were no pre-cancerous spots on my face today. Of course that was just my face. My dermatologist found some spots on my ears and hands, so I wound up getting zapped with liquid nitrogen anyway. Just as well … I wouldn’t have felt I’d gotten my money’s worth if I hadn’t emerged from her office without a few frozen spots on my hide.

Things are bad and getting worse, but Polly’s still working her ass off at Amazon, with lots and lots of mandatory overtime. I think I’ll start calling this the Polly Index, and including it in future plague year posts.

Kidding aside, I’m starting to think … along with many others … that things are never going to be quite the same after COVID-19. I mean, Jesus, just watching people doing normal social things on TV is already bringing on emotional waves of nostalgia! Whether the changes prove good or bad remains to be seen … like Mister B’s turtles.

2 thoughts on “A Dread, Whirring Noise”