Donna got up early with the dogs, fed them, then put Mister B back under the covers with me. I crawled out of bed half an hour later, brushed my teeth, got dressed, grabbed a cup of coffee, and went into the home office to log on for news and email. An hour after leaving the bedroom, I heard a faint whine. It was Mister B on the bed, letting me know he was still there and wanted down. There’s no jumping off our bed … it’s far too high for dachshunds. They sell doggie ramps, I’m told. We really need to get one for the bedroom.

Yesterday, Donna took the new kitchen out on a shakedown cruise:

That’s Donna’s friend Millie and her three great-granddaughters, making gingerbread houses. I’m glad I took the second photo when I did, because later the girls went a little crazy with the white frosting, covering up most of the colorful candy on the roofs and walls. But they had great fun. Meanwhile, Mister B and I settled into our little oasis of calm in the farthest corner of the family room. Contentment, with a whiff of holiday spirit. 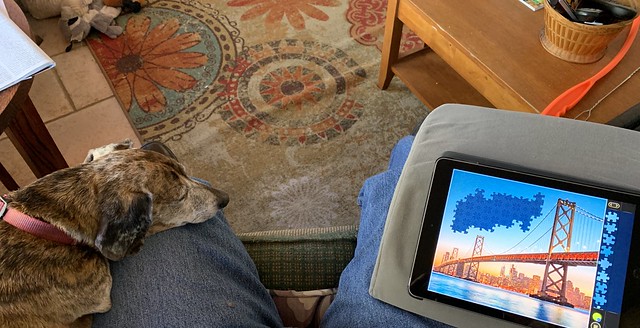 We’ve invited a few friends to drop by Christmas Eve for a shrimp boil and clam chowder, so the kitchen’s going to get another workout, this time at my hands. Donna announced this morning that keeping up with the house has become too much for her and she’s going to hire a housekeeper to come twice a month. I’m all for that, even though it forces us to face the fact that we’re easing into our assisted living years. But cleaning up for Christmas Eve company is still on us, and I’m hoping Polly will pitch in and help today, since it’s one of her off days from Amazon (update: no it’s not, so no help from the daughter).

For some reason, right-wingers cling to the notion that saying “Merry Christmas” triggers pinkos like me. Funny, though, how you never hear Fox News raging about the War on Hanukkah. Hanukkah, this year, begins this evening and ends the evening of Monday the 30th. Christmas, of course, is technically just the one day, but in practice has become a multi-day event, Christmas Eve through New Year’s Day. Granted six of those days are wholly secular, unlike Hanukkah, I’ve always been jealous of the Menorah candles, and wish Christians had a candle tradition for the days that wrap up one year and start another. I guess you could argue that the advent calendar is religious equivalent of the Festival of Lights, but I want candles too!

Anyway, saying Merry Christmas triggers me not at all, nor does it trigger anyone I know. This is the charitable time of year, a time when nearly everyone is in a giving mood. And while the season is hard on some, for a variety of reasons, it’s a happy time for most of us, regardless of faith. I’m just saying it would be happier if we all had candles!

If I don’t get back to you for a few days, Happy Hanukkah and Merry Christmas!

One thought on “Lighting Candles”