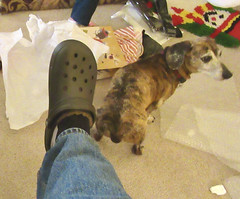 Donna said she was stumped on what to get me for Christmas, so I suggested a pair of Crocs. I love the leather Merrell open-heel slip-ons I got two years ago, and expect to love the Crocs just as much, though they put me in mind of those grotesque Earth Shoes trendoids wore 40 years ago. Remember them? The ones with low heels that made you look like you were about to tip over backwards? I never once considered wearing those, but now here I am with Crocs on my feet.

The photo, I just noticed, makes it look like I’m giving Mister B a kick to the behind. God forbid! He just happened to notice I was taking a photo and that he was in it … he hates being photographed, and you can tell because whenever you point a camera or cell phone at him he tucks in his tail.

Well. We had a lovely Christmas, and hope you did as well. Even if you don’t celebrate Christmas! We had a crowd over Christmas Eve for my clam chowder and shrimp boil; then Donna’s eggs Benedict after unwrapping presents Christmas morning. Both meals have become tradition at our house. We don’t do a big Christmas day dinner … Thanksgiving’s still fresh in our memory, and who needs another huge feast so soon after that one? Donna intended to serve scallops along with the chowder and shrimp on Christmas Eve, but in the rush to finish everything before company arrived we forgot them, so they became our Christmas day supper, served over pasta in a creamy butter-garlic sauce. I’ll get around to posting both recipes on my cooking blog, Crouton’s Kitchen, one of these days soon. Since the clam chowder and shrimp boil recipes are already up there, I’ll just post photos of the eggs Benedict and scallops here:

Apologies if you’ve already seen these on Facebook, where a friend commented on the trays. It’s true, we eat most of our meals on trays in the family room, and my food photos are often taken with an iPhone pointed down at my lap. We sit down at the table on Thanksgiving or when we have company for dinner, which is only three or four times a year. Donna says we should eat at the table more often, but I’m wearing her down.

Speaking of wearing people down, one of my favorite columnists and bloggers, Nancy Nall, says she wants to disengage:

I’m considering my one-word new year’s resolution in these final days, and considering Disengage. For a journalist, it feels like a betrayal. You have to stay engaged! You have to keep up! But I am honestly exhausted with keeping up. I don’t want to know anything about Baby Yoda. I don’t subscribe to Disney+, I left all things Star Wars behind in, what? Nineteen-eighty-something? Is there a filter I can install, an app of some sort, that will tell me what I want to know, and what I need to know, and maybe surprise me with some things I didn’t know I wanted to know but am now glad I know, without including Baby Yoda? And all the social-media bullshit that goes with it?

Nancy talks about Baby Yoda and social media bullshit, but I think she’s really talking about Trump. I feel the same way. You’ve probably noticed a strong turn to the personal here at Paul’s Thing. I’ve been writing about the things that make my life worth living, avoiding commenting on the things that make me wish people were better than they are, that we lived in a happier, more humane world. But damn it, disengaging is what they want us to do! They want to wear us down to the point where we roll over and give up, to accept living in a country that puts kids in cages and pardons war criminals, a country where the worst racist and anti-Semitic impulses of illiterate deplorables get a wink and a nudge from an unelected president no one has the balls to take down. But what, apart from voting and voicing my discontent on my blog, can I do? And my friends … even the ones who hate what’s going on as much as I do … say they like my personal posts far more than my political ones. And I have to admit, so do I. Yes, I’m retreating a bit, but I’ll still do what I can, and hope for better days.

There’s still time to achieve my 2019 goal of losing ten pounds. Only fifteen to go!

One thought on “What a Croc”