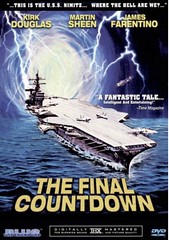 Sorry, Die Hard fans, yours isn’t the only Christmas movie. So is The Final Countdown. As long as we’re on the subject, so is HBO’s Watchmen (which I finished last night and pronounce doubleplus good).

One more week. Seven days. My shopping is done. Will it piss you off if I gloat? It certainly set Donna off when I mentioned it just now, which I take to mean she hasn’t even started. You can say what you will about Amazon, but I say thank god.

Actually, the poster on the left is relevant to a thought I had this morning. The trailer for Top Gun: Maverick was released yesterday, and aviators and aviation fans immediately started complaining about overuse of CGI in the flying scenes. Remember the movie Midway, released just a month or two ago? No? That’s because it died a quick death, and the reason was too much CGI … the flying wasn’t real. So yeah, if that’s what Tom Cruise’s new movie’s going to be like, why even bother? Stick with the original … at least the flying scenes were real.

Perhaps in response to yesterday’s criticism, today the production company released a behind-the-scenes video. It’s titled Top Gun: Maverick–Real Flying. Real G-Forces. Pure Adrenaline (click the link to see it). Turns out there’s real flying in the new movie after all, plenty of it, and avgeeks like me can rejoice … I, for one, will definitely go see it when it comes out in a few months.

So getting back to that thought I mentioned. Someone associated with the new movie got a back seat ride in an F/A-18 during filming and said this on Twitter: “Can confirm pulling ‘G’ in the back seat of a @BoeingDefense F/A-18F Super Hornet is like going 5 rounds with Mike Tyson—but a bloody awesome experience!!” And you know, that’s the exact analogy I use when explaining Gs to Pima Air and Space Museum visitors. Except I say Muhammed Ali. Or, sometimes, George Foreman. Do younger visitors even know who Ali and Foreman were? Would Mike Tyson be a better choice, or Canelo Alvarez? Maybe I should switch to a WWF analogy: “Pulling nine Gs is like getting slammed to the mat by The Rock.” It’s time to update my spiel!

Related, kind of: a Gen Xer I follow on Twitter, Xeni Jardin, posted this today: “Your regular reminder that Edward Snowden is not on your side. Whistleblowers don’t run to Moscow with help from dirtbags. Spies do.” I’m not sure what her statement was in reference to, but it reminded me of Viktor Belenko and my reaction to him.

Way back in 1976, Belenko defected from the Soviet Union with a new and highly secret MiG-25 Foxbat, landing at a northern Japanese air base. After debriefing Belenko the CIA and DoD put him on the road, visiting operational US fighter units to talk about the MiG-25, Soviet tactics and training, and what life was like in general for Russian pilots. It was fascinating information, and we peppered him with questions, but when it was all over my reaction … and the reaction of all the other pilots I knew … was a strong feeling of distaste for the man. He was a traitor. He betrayed his country. And he left his wife and children behind.

My feelings about Edward Snowden are similar. If he’d stayed behind to face the music he’d have been a hero, like Chelsea Manning or Reality Winner. Instead, he ran. He’s a traitor, never mind that he peeled the lid off something that needed to be exposed. I replied to Xeni with a short version of my Belenko story, and then as I wrote about Ali and Foreman a few minutes ago had a similar thought: do younger people even know who Belenko was and why he was important?

Okay, boomer. Damn but I am getting old.

Our project today is to put cookbooks in the last empty cabinet in our remodeled kitchen. I’m helping because it’s an overhead cabinet. It’s going to be a bigger job than you may think, but when it’s done the kitchen do-over will be complete (the missing accent tile came in and was installed yesterday) and I’ll post another round of photos. Meanwhile, if you’re interested, I added a few short videos of the self-closing cabinets and pull-out drawers to our Kitchen Remodel album on Flickr (scroll down to the newest uploads to see them).

But you’re here for pet photos. No, don’t deny it … I can read you like a book. Here are two I took this morning:

It was just above freezing when I took these. Maxie … who does not go for walks if she can help it … had cocooned herself in a blanket on the dog couch. Mister B, as always, was up for an outing, and since I was bundled up in ski pants and a fleece jacket I put a fleece wrapper over his harness. I think he appreciated it … he pranced up and down our cul-de-sac, which I took as a sign of approval.

Seven days, baby. Have you finished your shopping?