A chilly morning in Tucson. Mister B started pulling hard for home the second his did his business, so our morning walk was a short one. Time to break out the dog sweaters.

A friend gently hinted I’d gone a bit overboard on Facebook and Instagram with kitchen photos, to which I responded, “Well, if you can’t have fun with social media, what’s it even for? Oh, right … handing your personal information over to faceless corporations to use in targeted advertising.” Anyway, after this one I won’t post any more until the kitchen’s actually done. Which it almost is. 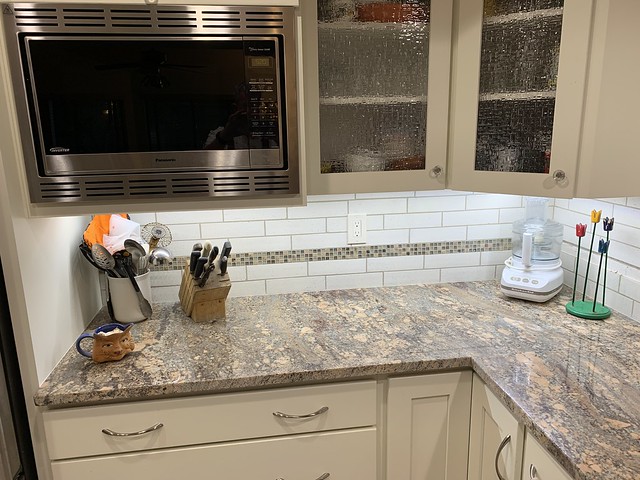 The walls are tiled now, but even though we measured twice, we came up short on the colored glass tile for the accent strip, as you can see behind the food processor and the little drying rack. Not a single supplier in town had that particular tile in stock. We ordered more and are supposed to get it tomorrow. The tile guys say they’ll come over Saturday to finish the job, which’ll wrap everything up. I’ll take some photos then and post them. That’ll be the end of it and we can get back to dachshund photos. I promise!

My list of chores today includes putting the plastic bin of Thanksgiving stuff back in the garage and bringing in the Christmas bins. We don’t have any decorations or lights up yet. I’d like to get a string of solar-powered lights to wrap around the palo verde tree in front of the house, and maybe put up a string of regular colored lights around the front door, but that’s about it. It’s not looking as if we’ll even have a Christmas tree this year. We plan to invite friends over for seafood on Christmas Eve, as we normally do, and I think there ought to be at least an attempt at a tree, but Donna and I disagree on what kind. I want an artificial one we can reuse for a few years while Donna wants a real one, so we’re locked in a tree stalemate.

The Christmas letter, on the other hand, is written. Now for the hard part: formatting and printing 60-plus address labels, stuffing and stamping envelopes, getting them in the mail to friends and family. My desk will be a mess for the next few days.

Donna’s desk now has my old 21″ iMac on it. She finally decided, three or four months after I offered it to her, to start using it. She was resistant to switching from PCs to Macs, but she’s been using a Mac laptop for quite a while now, so I guess she was ready. That’ll make things simpler in the office, I hope. She still uses a PC laptop, but only for digitizing artwork for her embroidery machine.

We watched an hour of Netflix’s three-hour-plus The Irishman last night. Pretty good stuff (we’ll watch the rest over the next couple of evenings). We’re both very into HBO’s His Dark Materials, breathless over every cliffhanger ending. I saw some asshole on Twitter bitching about Monday’s episode, titled The Dæmon Cages, saying it doesn’t give enough emphasis to the connection between humans and their dæmons in Lyra’s world, when to my mind that’s precisely what the episode is about, and now I’ve resolved to be less critical of the creative efforts of others lest I be mistaken for some Twitter asshole.

I almost said “some random Twitter asshole,” but caught myself in time. Twitterati use “random” and “rando” as nouns and employ them disparagingly. You see them used in tweets like “Clicked on some random’s profile on Twitter” or “Some rando questioned my expertise.” It comes across as belittling people for not being verified-account face cards or celebrities. How shallow do you have to be to think only the statements and opinions of celebs are worthwhile? Shoot me if I ever call someone a rando.