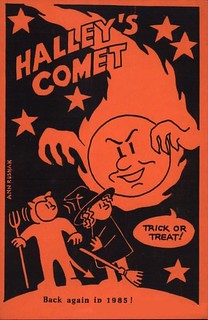 Why the 31st of October hasn’t been declared a national holiday is beyond me. But I don’t get to set the rules. Anyway, happy Halloween, and happy birthday to me and all the other Halloween babies!

It’s a subdued birthday. I bought myself a point & shoot digital camera earlier this month, one I can wear on a lanyard around my neck and take photos with one hand while I’m riding the motorcycle. I also indulged myself with some Kindle books from Amazon. More than enough to satisfy the birthday gift requirement.

Since you asked, I’m 73 today, and good lord that’s old. In 1956, when I was 10, I wanted to know if I’d still be around to see Halley’s Comet on its next visit. The math was tricky because its orbit isn’t precise, lasting between 75 and 76 years. My calculations said it would return in 1986. Another mathematical operation told me I’d be 39 then. I couldn’t imagine living that long! My parents were barely in their 30s, and they were ancient!

Halley’s Comet returned in February of 1986. Despite earlier doubts and misgivings, I lived to see it. My math had been right on and I was indeed 39. Donna and I had been married for 21 years. Our son Gregory was 21, grown and gone, and we had a 12-year-old daughter, Polly, at home. The comet turned out to be a disappointment, a tiny fuzzy dot in the night sky that didn’t even have a tail, a total bust. But my 40th birthday, later that year, was a good one, as all of them have been, this one included.

Tell you what, it’s easier to imagine yourself in old age once you start closing in on it. Kids don’t know shit.

The kitchen work continues. The ceiling has been raised, the recessed lighting installed. The drywall guy is here today, the painter’s coming next week. After that they’ll start putting in the new cabinets and fixtures. We’re on schedule so far.

Here’s the birthday breakfast Donna cooked for me. In the laundry room, on top of the washing machine. Polenta and eggs, my favorite!

I told a story on Facebook yesterday about a Pima Air and Space Museum visitor who pointed to a helicopter and asked where the shaft was. I thought maybe he meant the driveshaft that turns the tail rotor, enclosed in the tail boom and not visible, but after a little Q & A I realized he meant the main driveshaft, the one that turns the main rotor blades. The totally visible vertical shaft sticking up from the top of the helicopter right in front of us, had it been a rattlesnake would have bitten us.

If this guy was confused, he had nothing on the guy earlier this year who asked me about the Dutch fighter he’d seen on the tram tour. At the time there were no Dutch aircraft at the museum (there’s one now, a Fokker F-27 Friendship airliner), so as with the helicopter shaft guy, I prompted him with questions to narrow down what he thought he’d seen. It turned out he’d seen a license-built Chinese MiG-19, a Shenyang J-6, in Egyptian markings. “Actually, sir, that’s a license-built Chinese MiG-19, a Shenyang J-6, and the markings on it are Egyptian,” I said … not in an officious know-it-all way, but in a deferential “I can understand how those Egyptian roundels look kind of European if you ignore the Arabic script on the nose and have the Netherlands confused with some Eastern Bloc Warsaw Pact Soviet satellite state” way.

My job as an air museum docent has done wonders for my patience and diplomatic skills. So has the fact I’ve lived to be an old man (and one who has witnessed Halley’s Comet, to boot).