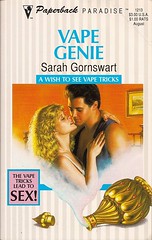 Weblog sidebars are useful things, and I use the hell out of mine. Among the things listed and linked to on the right side of Paul’s Thing are the books I’m currently reading. Not everyone gets my little jokes, though, so I should explain that for a few years now, the last book in the “Reading Now” column is just for fun. It’s not actually on my reading table, and I wouldn’t know how to get a copy even if I wanted to read it. Some are real books and some are fake, but I call them all faux books and rotate them with every reading list update. I hope you love those lurid covers as much as I do.

Sunday morning. One week into remodeling the kitchen. Carpentry and electrical work are done: ceiling raised, recessed lighting and exhaust fan installed, drywall up and mudded (?). Painting’s next, then the installation of new cabinets, cupboards, island, etc. Three weeks to go.

Hoping my friend and motorcycle maintenance guru Ed calls this morning to invite me over. I have a couple of minor jobs to do on my Honda (replacing worn rubber footpeg inserts and a helmet lock latch in the tour pack), and want to use his lift to bring the work up to waist level. I could do what needs to be done in our own garage, but I’d have to lay down prone on the floor to do it, and might never be able to get back up. Still planning to get a motorcycle lift of my own once the kitchen is done … if there’s money left over, that is.

Speaking of motorcycles, here’s a nice shot of me and my son Gregory riding in the mountains north of Las Vegas last month. We were headed up to Lee Canyon with a couple of friends, then on to lunch at the lodge on Mount Charleston. Probably snow up there now; if not, then soon. 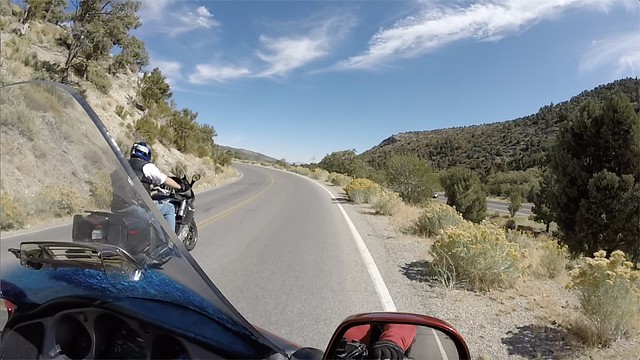 I don’t know why the words “tax increase” are such a third rail for presidential candidates, but they clearly are. Never mind that Medicare for All would eliminate medical insurance payments, co-pays, and surprise hospital bills, more than offsetting whatever small payroll tax increase would be necessary to pay for it, voters can’t seem to see beyond the words “tax increase.” It seems an insurmountable problem, but there was a time, not really all that long ago, when countries like Canada, England, and Germany didn’t have national health care and had to go through the same thrash we’re going through now. They managed it somehow, so I’ll keep hoping we can too.

Donna and I? Well, we’re old enough to have Medicare, supplemented by Tricare for Life (the military retiree plan), so we’re set. It would be easy to say “we’ve got ours” and ignore everyone else, but I guess that’s the difference between Democrats and Republicans, and we’re not Republicans.

Maybe racism is the real, unspoken issue people have with increasing taxes to pay for things we badly need … the idea that while white people would benefit, so would everyone else.

Who says TV can’t be educational? I’ve been watching HBO’s “Watchmen” and wondering what else, beyond the Tulsa Massacre* of 1921, we’re still not teaching our children in history class. Things like the WWII internment of Japanese-Americans, the Mexican Repatriation of the 1930s, or the “sundown towns” that dot the country (not just in the South, but all over). Things that happened, and continue to happen (like the separation and subsequent forced adoption of children from Mexican and Central American parents apprehended crossing our border), that belie the image of America we’re taught as children, the beacon of hope to the world.

*Wikipedia calls it the “Tulsa Race Riot,” but also refers to it as the “Tulsa Massacre.” I use the latter, because we’ve been trained to think of race riots as violent black uprisings, not violent white assaults on black people and other minorities.