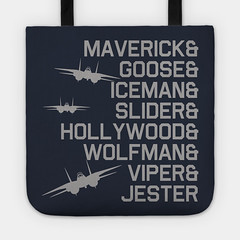 We have a couple of presidential aircraft at Pima Air and Space Museum, and visitors taking my tour are always eager to learn more about them. I usually stick to a script, but yesterday was able to add something new: the presidential VC-25 sent to carry former President George H.W. Bush’s body from Texas to Washington DC later that day would be using a one-time callsign, “Special Air Mission 41,” the elder Bush having been the 41st president. I swear to god, a couple of people on the tram looked like they were about to cry. I’ve seen this before, talking about Jack and Jackie Kennedy and the famous Air Force One paint scheme they introduced in 1962, the one still used today.

Time permitting, I mention earlier presidential aircraft during this portion of the tour: FDR’s Sacred Cow, Truman’s Independence, Eisenhower’s Columbines. I explain the origins of the Air Force One callsign and other presidential aircraft callsigns: Army One (Eisenhower), Navy One (George W. Bush), Executive One (Nixon, who during the 1970s gas crisis flew to a meeting in California on a scheduled United Airlines flight). No president has so far flown on a USCG aircraft; hence, no Coast Guard One.

That leaves Marine One, the callsign used by USMC helicopter crews flying the current president to and from the White House. This is the point of highest danger on my tour, because I refuse to say the current president’s name. “Current president” is as close as I come; I have to carefully engage my tongue to my brain lest I blurt out “President Individual One” or something worse.

In other museum news, I find myself enjoying the shortened tram tours (45 minutes, versus the one hour-plus tours we conducted before) more and more. Not so sure I’ll like doing three or four of them a day, but that’s yet to come, probably early next year.

I’m almost done. Yesterday, while sitting at an outdoor table at Pima Air and Space Museum‘s restaurant, a spot that provides a little elevation from which to look out upon the museum grounds, I was struck by the way PASM’s B-52 looms over the smaller training aircraft lined up in front of it. 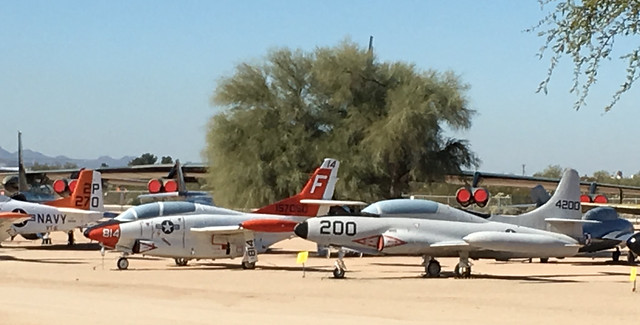 One of my better “Monday at the museum” photos, IMHO.

My father once had a minibike, one of those Briggs & Stratton-powered open-frame scooters with a centrifugal clutch. During visits home to Cape Girardeau, I’d ride it around the property with Gregory on my lap, thoughtlessly sowing the seeds of his future motorcycle delinquency. Greg recently came across an old minibike magazine ad and thought it looked like the one he remembered from his childhood. He also remembered seeing an old photo of the two of us on Grandpa’s minibike. We looked up the photo and compared it to the ad, and by golly it’s the same minibike. Apparently people collect them now. Alas, Dad’s old scooter is long gone.

Donna and I celebrated our 53rd wedding anniversary Sunday by going to a friend’s 55th birthday party. By the time we got home we were too tired to even get through a TV show without nodding off, never mind celebrating in the traditional manner. Time, you old devil, you.

We polished off both seasons of Anne with an E on Netflix and have been looking for something similarly charming and uplifting. Surprisingly, Chilling Adventures of Sabrina (also on Netflix) seems like it might fit the bill … while also scratching the itch for more Buffy and Veronica.

Donna hasn’t gotten into the holiday spirit, by which I mean she hasn’t started putting up Christmas decorations. When our son was here over Thanksgiving he offered to string the outdoor lights and she told him not to. This is unprecedented. I’m going to ride it out and see what develops. At least I can say my Christmas shopping is done, along with the annual letter to family and friends … now all I have to do is stuff the envelopes.

Lastly, I note with sadness the passing of four Hash House Harriers in Uganda, hashers we never met (and were highly unlikely to ever meet); still, they were brothers and sisters, members of the tight little community we’ve been part of for 30 years, and while we always pause to raise a toast to the memory of hashers who die of old age or illness (more and more of them every year), losing four at once to a horrible accident is a shock. There’s more information on my hashing blog.

Update (12/5/18): I was told, and believed, that President Carter once flew on a USCG aircraft (Coast Guard One). That turns out to be untrue, and to date no president has. I updated the second paragraph of this post to reflect that.