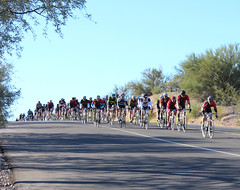 It’s El Tour de Tucson day and we’re housebound, at least until all but the stragglers pedal past our neighborhood. The only way out requires crossing the tour route, which’ll be blocked to car traffic for a while yet. The stragglers, who’ll be about 25 miles into their 100+ mile route as they pass our street, would probably welcome being run over, but I’m not going to be the one to do it … I’ve ridden in two of these events myself, and admire anyone who’s willing to tackle it.

The only reason I’m not at the end of our street taking photos of the lead riders as they whiz by is that when I look at my old El Tour photos (like the one to the left, from last year), they’re kind of meh. I don’t have much of an eye for sport photography. Also, too, I had an unsettling vision of Mr. B slipping out of his harness and darting into the street just as the lead peloton crests the hill.

I do, though, want to take photos at a car show three miles away, but getting there requires crossing the tour route in two more places. I wonder if the organizers realized they’d be competing with the biggest annual bicycling event in Arizona?

Later: I gave the El Tour riders two hours to get past our area and then headed out. A few stragglers were still on the route and a race marshal had me wait for a few to go by, but after that it was clear sailing to the car show, because when I got to the other route crossings all the riders had passed and the officials were packing up to go home. The car show was small but okay. I saw a few things I liked, and uploaded the photos to Flickr. You can click here to see ’em.

Not in a clicking mood? Here’s one to prove I was there:

I had Lee Child’s latest Jack Reacher novel, “Past Tense,” on reserve at the library. I was #200 on the wait list for the hard copy; #122 for the ebook. The library sent an email to tell me another book I reserved was in, so on my way home from the car show I stopped to check it out. There, on the New Books shelf, was a hard copy of “Past Tense.” Tell you what, I’m having a great day!

Oh, don’t know if you saw it on the news, but Lee Child, after previously approving the choice of Tom Cruise to play Jack Reacher in two movies, has bowed to public opinion and now admits Cruise is “too short” for the role. Child is involved with the production of a series of new Jack Reacher movies for streaming TV, and Cruise is out. Now I’m not trying to curry favor with the Church of Scientology, but I enjoyed both movies (2012’s “Jack Reacher” and 2016’s “Jack Reacher: Never Go Back”). Granted, Tom Cruise isn’t the same order of creature as the 6’5″ 250-pound Jack Reacher, but in the movies he conveyed the attitude.

It’s a beautiful day for El Tour riders, and anyone else who ventures out (and I hope they do). I’m so happy it’s finally fall. Our kids and grandkids will be here for Thanksgiving; we expect this perfect weather to hold through the week. We’re ready for winter, too, should we get one this year: Donna and I re-wrapped the outdoor water pipes yesterday, and later today I’m putting up a new patio thermometer to replace the one that broke when we had the house repainted.

Life is good; even better now that we have a Democratic Party congresswoman and senator to represent us in Southern Arizona. Maybe it’s time I start another letter-writing campaign to have Rush Limbaugh kicked off Armed Forces Radio!

More soon. Get out and enjoy the weather!