I’m thinking about developments at Pima Air and Space Museum, where I volunteer as a docent and tram tour guide … which, of course, means it’s time for an Air-Minded Air Museum Update.

Update #1: starting on a happy note, our WWII Ilyushin IL-2 Shturmovik is coming back together. This old bird was a bruiser in it’s day: the Soviet tank-killer, the Sergey “Krusher” Kovalev of warbirds. I sometimes wonder if, late at night in the darkened restoration hangar, its red electronic eyes wink on like those of the waking Optimus Prime, disguised as a derelict 18-wheeler surrounded by hay bales in a barn. Here are two photos from last week and this: the Il-2 being towed from Area 51 (where the fuselage was assembled) to the main resto hangar; the IL-2 in the resto hangar with the wings mounted (and an A-20 Havoc in the background).

The crew of our IL-2, the story goes, ditched it in a lake south of Leningrad in 1944. It remained in the lake, later a swamp, until the early 1990s, when it was recovered and bought by an American. The buyer may have intended to restore it, but died before any work was done. His family donated the wreckage to Pima Air and Space. When I started volunteering at PASM in early 2011, the Shturmovik wasn’t recognizable as an airplane: it consisted of several wooden crates with Cyrillic stenciling and three bent propeller blades, minus its Mikulin engine (which was on display in one of the WWII hangars).

During the decades the Il-2 was under water, its wooden parts—the empennage, tail, and wings—had rotted away, leaving only the aluminum wing box, forward fuselage, cockpit, engine compartment, engine and propeller. The museum began restoring the Shturmovik a few years ago, using blueprints to build new wings, empennage, and tail surfaces in one museum building and reassembling the metal parts in another. Today it’s once again recognizable as an airplane, but along the way—according to a friend who works in restoration—the museum began to suspect it was working with the remains of two different Shturmoviks. The wing box, apparently, did not quite mate up with the fuselage, and the restorers now think it came from another version of the Il-2. The wing box was modified to fit, but there’s a strong possibility the wing box belonging to our Il-2 is still in the swamp, along with the fuselage of a second Il-2, waiting to be recovered. 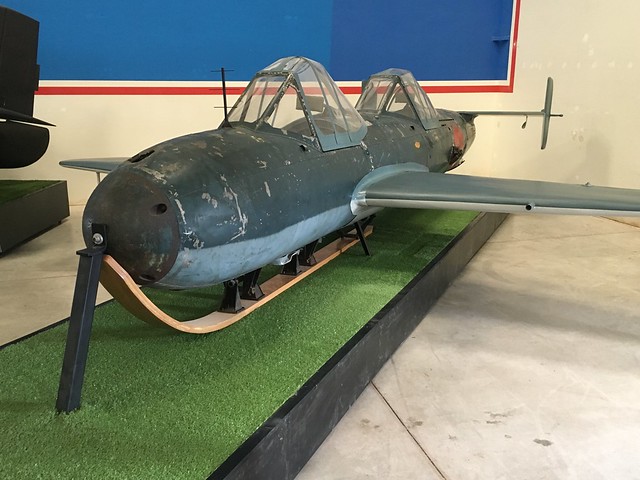 The Wakazakura was crated up in Japan and shipped home by the U.S. military at the end of WWII. It was on display at a Navy museum until 1974 when it was crated up again and given to the Smithsonian, which loaned it to PASM on the condition we display it in its original condition. We had to build new wings, tail, and canopy frames for it, but the fuselage and paint are original. It’s on display now in Hangar 4.

Update #3: This one will probably be of little interest to you, but I’ve been thinking about it since being briefed yesterday, and am not yet sure where I stand on it. I’m talking about new tram tour procedures, and how they will affect the docents who lead those tours.

Until recently PASM had two gasoline-engined trams. One held 50 passengers; the other 40. We offer three tram tours daily, at 10 AM, 11:30 AM, and 1:30 PM (plus a 3 PM tour during our busy season). Depending on demand, we could drive both trams on a tour and accommodate up to 90 passengers. In October the museum replaced the old gas-engined trams with new electric ones, which are awesome … but considerably smaller. The big one carries 34, the little one 16, for a total of just 50 passengers if we double up. The museum charges $6 per passenger for these tours, so the smaller capacity is a hit to the pocketbook, and I expected them to confront that fact sooner or later.

What bothers me is they’re telling us the new procedures are based on feedback from museum visitors. It seems pretty obvious the new procedures are actually meant to help the museum sell as many, or more, tram seats as in the past, and I just wish they’d be up front about it. Because, honestly, if you were running the place, you’d be doing the same thing, and we’re all grownups in this room, right?

So … apart from the money aspect, how to shorten a tour of 150 outdoor display aircraft to 45 minutes? I’ve been doing the old tours in an hour or just under, talking about 80-90 aircraft (my narration had to be factually correct but otherwise was up to me). What they want us to do now is to cover 30 or so designated aircraft, and memorize a museum-approved script to go with each. In theory, cutting the tour to just 30 planes and sticking to the script, we can do the tour in 35 minutes, which leaves 10 free minutes to talk about additional aircraft of our choosing.

One of the reasons I don’t buy the museum’s story about basing these new procedures on visitor feedback is the choice of aircraft to cover. Most are ones I know visitors come to see, like our former Air Force One, but a few (the British Gnat trainer and the German/French Alphajet trainer among them) are ones I have never ever heard a visitor express the slightest interest in. It’s not just me; to a man (unfortunately, at the moment we are all men) we’re scratching our heads over some of the museum’s choices.

One volunteer, a 15-year veteran, was so upset he stood up, announced his immediate retirement, and walked out of the room (it would have been a more powerful statement if he hadn’t forgotten his jacket and had to come back to get it). As for me, I told our volunteer coordinator, the young woman who introduced these new policies, that we’re getting close to the point where they ought to start paying us for what we do, given that we’re making so much money for the museum. Of course it was a pop-off remark, and I don’t expect anything of the kind, but the museum’s doing its best to turn a fun volunteer activity into actual work, and I expect we’ll lose another volunteer or two in the coming weeks. Why? Well, our busy season is just starting, and the reality of three to four tram docents (most days it’s three, some days just two) splitting up to twelve tours a day is going to sink in toot sweet.

As I said, I’m still thinking about it. I’m in … I’ll do my best to make it work, but will it still be fun? That remains to be seen. It’s a good thing I love old planes and learning new things, is all I have to say for now.