A friend said he detected an undercurrent of sadness in my most recent Paul’s Thing post. I intended world-weary cynicism, but if it came across as unhappiness, I’ll try to set things right with this post.

If you’re a Hash House Harrier, you might recognize the bag: it was made for me and my former Half-Mind Catalog website by noted California hasher Nut’n’Honey, the brilliant cartoonist behind Hash Boy Comics. It’s a pretty happy bag!

Speaking of happiness, my friends and motorcycle maintenance gurus Ed and Paul finished fixing my Goldwing, not merely fixing but tweaking it to as-new condition, and I can’t wait to go riding. Now that it’s cleaned up and topped off with premium as a reward for enduring the indignities Ed and Paul and I put it through, I’m pretty sure it can’t wait to go for a scoot either.

I had planned to lead a group ride to Arivaca in October but had to cancel because the maintenance we were doing on it took longer than we’d planned, so I’m thinking about rescheduling the same ride later this month. 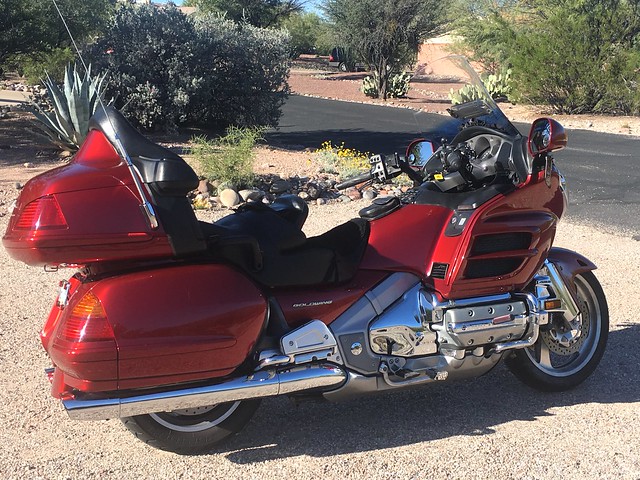 Friends were here to visit, Bill and Terri from Newport News, stopping by in the middle of a cross-country trip, for all the world like Ricky and Lucy with their long, long trailer, which they set up in our driveway. They arrived in the afternoon and could only spend one night, so we worked in a whirlwind tour of the air museum and then caught up with old times over a dinner of venison backstrap rollmops and smoked spareribs. Bill had a long Navy career in subs and carriers, so naturally I had to brag a little about my time in fast jets, like this one: 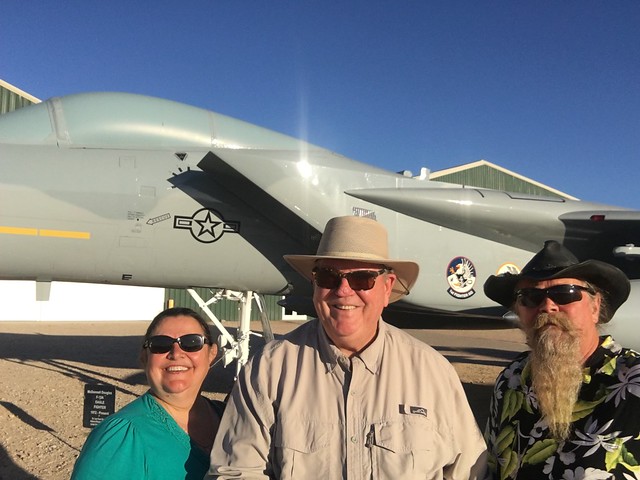 In preparation for Bill and Terri’s visit, Donna threw the Hash House Harrier t-shirt quilt she made me over the back of the couch (they are hashers too, and they noticed it right away). Mr. B and I think it ought to stay there at least through Thanksgiving, when we’ll have more company. 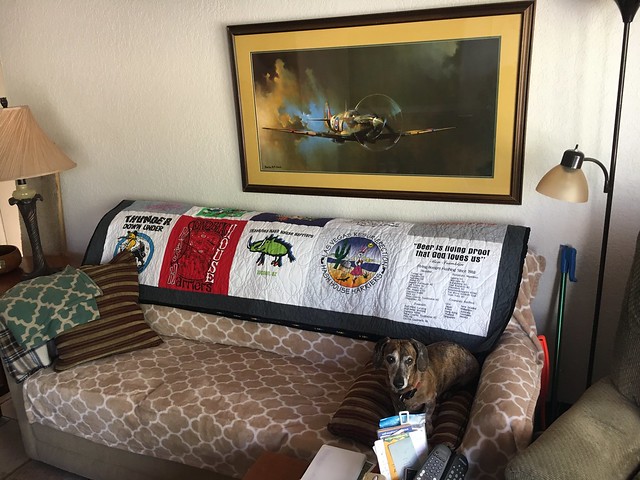 I’m not sure everyone understands how voting works. I’m a little fuzzy myself, but my general understanding is that people either vote by mail or in person at the polls. In states that allow it, you can vote early by mail or in person; if you can’t vote in your state of residence because you’re overseas or whatever, you can mail in an absentee ballot; and of course you can always vote in person on election day. Vote counts often take a few days, because mail-in early and absentee ballots are counted last, and often by hand.

You’re an educated person, dear reader, and I didn’t mean to insult you. I’m talking to people like Donald Trump of Mar-a-Lago, Governor Rick Scott in Florida, and Secretary of State Brian Kemp in Georgia, all of whom are abusing the powers of the offices they hold to claim the normal counting of ballots is voter fraud, and to stop the count while the vote is going their way.

I said this on Facebook the day after the election:

Happy about taking back the House; sad about the great Dem candidates in different states who lost to particularly venal Repugs. Still a long way to go, but some very good things happened yesterday, and we should take heart. Still hanging tight in AZ over our Senate race. Go, Kyrsten!

It’s now three days after the election, and Democratic Party candidates have an even larger majority in the House than the count showed on the 7th; in Arizona, the count’s still going on for Senate candidates Sinema and McSally. It takes time. But in this case time’s working out even better for Dems than I dared hope. There’s even a chance two of the great Dem candidates, Stacey Abrams in Georgia (running for governor against the same Brian Kemp mentioned earlier) and Andrew Gillum in Florida (running for governor to replace Rick Scott), might pull out wins after all. The Texas votes, sadly, have been counted, and Beto O’Rourke lost to Ted Cruz. I’m sad about that … but he’ll be back.

Overall? We did good and we have a lot to be happy about. Trump can still do a lot of damage, but we’re in a much better position now to contain him, and judging by his flop-sweat performance at yesterday’s press conference, he knows it.