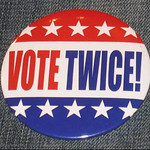 It’s election day. But you know that. And you also know if, at the end of it, Republicans aren’t still the majority party in both houses of Congress, they’ll claim fraudulent voting. Gerrymandering and voter suppression will get ten times worse between now and the 2020 elections. Let’s hope there’s something to this talk of a blue wave.

So can we look forward to the end of political robocalls and unsolicited texts? Hmm … first thing I saw on Twitter this morning was a story about Fox News being selected to host the first candidates’ debate for the 2020 GOP presidential nomination. Sigh. We’re not going to get even a minute’s break.

Trump held another of his white nationalist rallies in my home town, Cape Girardeau, last night. Local hero Rush Limbaugh was there to warm up the crowd. Sean Hannity took the stage with Trump, removing all doubt that Fox News is anything other than a state propaganda organ. I don’t doubt that a huge crowd turned out at the Show Me Center … Democrats in Southeast Missouri are as rare as double-jointed Uyghurs, and tend to keep their heads down.

Tuesday is Donna’s TV night, but I expect we’ll check election results during commercial breaks on NCIS. If I had any sense, I’d do what I did two years ago: find something else to do and not turn on the news until late in the evening, when it’s all been decided. That election day turned out to be a shocker. I hope this one will too … in the opposite way.

I had occasion to drive on to Davis-Monthan AFB yesterday. There was a traffic jam at the gate, with long lines of flatbed trucks hauling Army equipment and vehicles. They’re setting up a tent city on an open area just inside the westernmost gate, near the northern end of the flight line and close to an area occupied by the regional headquarters of the US Border Patrol. It’s not a concentration camp, as I first imagined: it’s for US troops being sent to the border. God, I hate to see the military used this way.

My usual daily news sites, Google News, Reuters, and The Guardian, are filled almost exclusively with U.S. mid-term election news and speculation, so I dropped in on the Reddit World News forum, where I saw some stories we really ought to be paying more attention to:

On to the personal side:

I have to be careful when to take Mr. B for his morning walk on Tuesdays. It’s garbage day, and he’s afraid of the truck. I check out the window first to see if our garbage bins have been emptied, then take him for his constitutional. Well, now I have to factor in the school bus as well, because he’s decided it too is scary. Trouble is, I can’t see the school bus stop from our window, so walking out the front door’s a gamble. I suppose I could time it, but that’d be too sensible.

Ed, my friend and motorcycle maintenance guru, called to say my motorcycle’s almost done and should be ready this morning. It’s been in Ed’s garage almost a month: disassembled, assembled, test ridden, disassembled again, now almost reassembled. I was able to help Ed with a lot of the work, but at some point I became more of a distraction than a help, and at Ed’s request got out of his hair so he could finish the job. I don’t resent it; actually it was a relief to get some distance from the project, which was keeping me up nights. I count myself lucky to have a friend like Ed.

From time to time I think how nice it would be to have a “townie” motorcycle, saving the Goldwing for long rides and trips. I had been imagining myself on a Triumph Bonneville, a BMW GS Adventure, or a Suzuki V-Strom, but then Harley unveiled their Livewire, and I am smitten! An electric motorcycle? Makes total sense for an in-town ride. I want!

Speaking of friends, an old hashing buddy and his wife are coming tomorrow, making a one-day stop in the middle of a cross-country road trip. They’re towing a fifth-wheel trailer, which should fit in our driveway but if not there’s an RV camp at the air base. We plan to hit the air museum and have smoked ribs for dinner. No hash, though.

That’s enough for now. More after the election, if we live through it.