Thirteen may be an inauspicious number, but it’s the number of years I’ve been writing about banned books, first for Paul’s Thing and later for Daily Kos, posting links on social media whenever I publish a new one. In that time I hoped others dedicated to combatting the suppression of books would become fans and help spread the word about YCRT!, and while never imagining for a moment I’d ever make a dime off this, I hoped exposure over time would lead to, I don’t know, maybe a chance to publish YCRT! in a print or online media outlet with a wide readership.

It hasn’t happened, and after 13 years it’s not likely to. I’m not whining; it is what it is. As of this column I’m relieving myself of the day-to-day tracking of news about book bannings, challenges, and censorship, and of producing new YCRT! columns on a regular basis. I’m still interested in banned books and will continue to read and review them, but those reviews will be folded into regular book review posts. If a news story about book banning catches my eye I’ll comment on it in a regular blog post, along with other topics.

For those of you who have enjoyed and supported YCRT! over the years, my undying thanks.

An Ontario, Canada, school district has urged high school teachers not to teach “To Kill a Mockingbird.” One teacher claims the memo outlining the policy implies the board will not support them if parents or students complain about racial language in the novel, and is a de facto book ban.

Similar attempts to suppress or outlaw the teaching of “To Kill a Mockingbird” continue to pop up all across the United States. The right has seized upon this as a weapon to attack the left, accusing liberals of hypocrisy in wanting to ban books. As Wonkette points out, banning books is more the province of conservatives. Like this guy, who checks out books with LGBTQ content from public libraries and literally burns them.

What is it about “The Absolutely True Diary of a Part-Time Indian” that drives rural communities wild? In the latest incident, an Emporia, Kansas high school teacher was suspended, not for teaching the book … but for considering teaching it.

Canadian school boards too discourage the teaching of controversial books, and as in the U.S. (see the item about the Kansas teacher suspended for wanting to teach “The Absolutely True Diary of a Part-Time Indian,” above), all too often the books they’re uncomfortable with deal with indigenous peoples.

Fort Myers High School in Florida notified parents that the coming-of-age novel “City of Thieves” was on a list of 10th grade reading options, giving them time to object beforehand. No one did, but after the book was assigned someone complained and a school administrator immediately caved, removing the book without review, in contradiction to school policy. Gee, the same old story, again and again.

Would-be readers of young adult books and graphic novels with LGBTQ themes are “stifled by banned book lists, principals who remove queer novels from school libraries, and parents refusing to buy them outright.” The publishing industry is beginning to take an interest in combatting this suppression.

Over the years, YCRT! has reported on many fights over books and class content in public school classrooms and libraries. Here’s a battle map, along with a summary of some of the latest conflicts between conservatives, educators, and students: 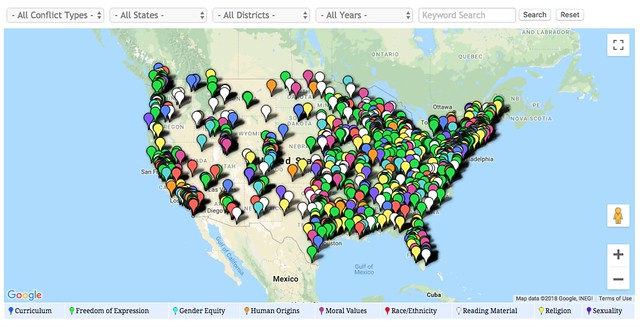 “The problem here isn’t pornography in library databases. The problem is a group of people who believe their prudery should be public policy.”

Another day, another university preventing student journalists from reporting on subjects that make administrators and donors uncomfortable.

I sent in my Arizona election ballot by mail, voting No on Proposition 305, which would take money from public schools to fund vouchers, enabling conservative parents to enroll their kids in know-nothing charter and religious schools.

Censored but not censored enough? “Kidz Bop is an abomination because it censors language but it doesn’t censor content. I don’t need a sanitized version of ‘Despacito’ — I need 8-year-olds not to be singing ‘Despacito’ because that [song] is super dirty.” I tread lightly here because I know nothing about Kidz Bop or the kinds of songs 8-year-olds like to listen to and sing.

It shouldn’t surprise anyone that the US military sees the internet as a threat to the sovereignty of states, responsible for creating conflict and disruption through rapid, widespread dissemination of misinformation. In considering how to combat this, military studies see the “best mechanism for suppressing oppositional viewpoints and promoting pro-government narratives is the private sector”; i.e., technology corporations like Facebook, Google, YouTube, and Twitter, which can “determine what people see and do not see.” Good thing civilians are in charge, right?

Forest County, Mississippi sheriff bans all books for jail inmates except the Bible and Christian publications.

YCRT!’s focus has always been on North America, but this article about the wholesale banning and burning of books in apartheid South Africa is well worth your time.