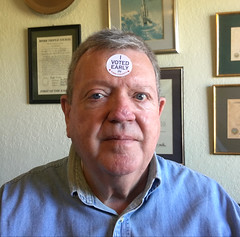 I don’t pretend to know what’s going to happen in the November mid-term elections. Change depends on Democrats and progressives turning out to vote. We know Trump’s base is motivated and eager to keep Republicans in power. We can overwhelm them easily … but not if we stay home. I mailed in an early ballot; I hope you too have already voted, or plan to on Election Day.

Speaking of the base, aka the deplorables (thank you, Hillary Clinton, for that insightful and accurate contribution to our political vocabulary), I have to wonder: when we were children, learning the values that would guide our adult lives, were a third of our schoolmates secretly thinking things like “screw bravery and standing up for what’s right, I’m going to be a sniveling coward when I grow up,” or “it’s always better to lie than tell the truth”? Probably not, but somewhere along the way they changed. There’s no getting them back; they live in the Upside Down now. The difference today is that they have a fellow deplorable in the White House.

The 30% have always been with us, and they’ve always been willing to resort to violence. In the wake of last week’s Florida mail bomber and yesterday’s synagogue killings in Pittsburgh, fears are growing of a dark new Trump-fostered trend toward racial, political, and religious violence. There’s nothing new about this kind of violence. Whether it’s on the increase remains to be seen. It’s certainly true that Trump encourages it, and as of yesterday has threatened to amp up the hate.

When we lived in Honolulu, I went out on a small rental sailboat with my brother-in-law John and a friend who’d just earned his sailing certificate. We were five miles off Waikiki when the clamps holding the rudder to the stern of the boat came off. The seas were three to five feet and our little boat, now uncontrollable, began to swirl about in circles. We quickly took down the sail to keep the wind from capsizing us, and after failing to find the emergency radio that should have been aboard but wasn’t, we found a sea anchor to trail behind us, holding the boat relatively steady. Eventually we located the Very pistol (thank goodness whoever had taken the radio hadn’t taken that too). We shot off a flare and a good samaritan in a powerboat motored out to us and towed us in to the Ala Moana Yacht Club.

I don’t have a high opinion of presidents in general, but I didn’t appreciate the importance of the leadership they provide until Trump took office and there wasn’t any. Since January 2017, the country has been without a rudder, swirling uncontrollably, reacting to every wave and current that hits it. Who’s in charge? Not the market. Not Congress. Not anybody that I can see. Taking back Congress next month can act as a sea anchor, holding us steady in the water until 2020, when we can elect a real president to start steering the boat again.

Ed, my friend and motorcycle maintenance guru, has long wanted to replace the steering head bearings, anti-dive valve, and throttle cables on my Honda Goldwing, so earlier this month I rode it over to his garage. I had a free day before leaving on a trip back east but we didn’t get everything done, mainly because the throttle cables I ordered hadn’t yet arrived, so I left it at his place. Ed took the bike apart while I was gone; when I got back we installed the cables, replaced the forks, and finished putting everything back together. I rode it home … only to turn around and ride it back, because it had a slight weave it didn’t have before. Ed test rode it and identified the problem right away. That’s fixed now, but there were some other things he didn’t like and the long and short of it is it’s still up on the stand in his garage. More parts are coming and later this week we should have everything sorted out, but I had to drop out of a group motorcycle ride I’d planned to lead today.

Here’s my poor Honda at the height (depth?) of the project: fairings, panels, and windscreen removed; front wheel, forks, and handlebars off; electrics disconnected; fuel tank lifted in order to get to parts underneath; gosh knows what else. At one point we even had to drain and remove one of the radiators to get to the bottom end of the throttle cables.

There’s not a bit of free space inside the guts of these machines … every cubic centimeter is occupied by valves, electronic controls, pipes and hydraulic lines, sensors, relays, and thick bundles of wires. You have to take parts off in a particular order to get a screwdriver or wrench in there, and a hand? Good luck! It’s surgical, and most intimidating.

Between wrenching sessions in Ed’s garage, I’ve been restoring our back yard and patio to order now the painting’s done, getting reacquainted with Anytime Fitness, riding the bicycle, working at the air museum, and catching up with blogging.

I left our Kindle on a plane in Las Vegas. I filed a lost item report with Southwest, but after getting five “sorry, we can’t find it” emails over five days, broke down and ordered a replacement from Amazon, at the same time deactivating the lost one. Naturally SWA wrote the very next day, telling me they’d found it … but wanted more than twenty bucks to mail it back to me; even more for express shipping. Well, I guess they can keep my old one, which shouldn’t work anyway now that Amazon bricked it.

In an uncanny coincidence, I picked up our Nook to take to the gym two mornings ago and discovered it no longer works. It won’t open, and I can’t reboot it. It’s the one model they made where the user couldn’t replace the battery; I’d have to mail it to Barnes & Noble to have it fixed, and I bet that would cost more than it’s worth, especially since we have Nook apps on our iPad and iPhones and can still read the ebooks we own.

It’s almost Halloween, my birthday, but the money I was going to spend on myself this year … probably next year as well … went toward motorcycle parts and a replacement Kindle.

Our neighbors, the Griswolds (not their real name), go all-in for holidays, Halloween most definitely included, and this year put up both an inflatable Darth Vader and a Minion holding a jack o’lantern. Here are the dogs checking them out this morning: everything’s cool when you’re on mom’s lap all safe in the car, but I guarantee the first time I walk Mr. B up the Griswold’s street and a breeze lifts Darth Vader’s cape he’ll jump right out of his skin. 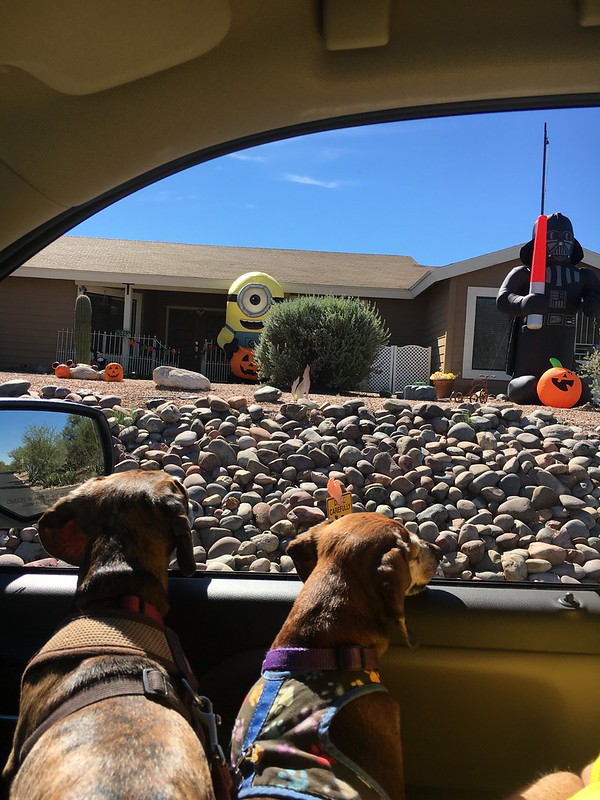 It’s good to be home and blogging again. It’ll be even gooder if we take Congress back in a couple of weeks. Dare I get my hopes up? Vote, damnit!