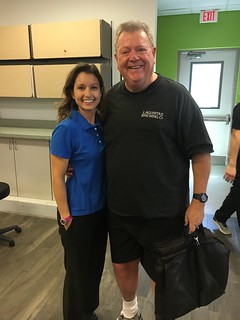 That’s my physical therapist, Jenny, who has put me through the paces for the last time: stretching, bending, climbing, riding; she who encourages patients, and me in particular, to work through the pain and get better. You know what? I’m going to miss her.

From this point on I’m on my own with home exercises and a local gym membership … but thanks to Jenny I know what I need to do.

When I got home from the final PT session yesterday I pumped up the mountain bike’s tires and rode up and down my cul-de-sac. Nothing to see here, folks, just another milestone on the way to recovery, important to me and probably no one else. The first few pedal strokes were Ow! Ow! Ow! painful, but after I stopped and raised the seat an inch it was like “Okay, I can do this!” Time to call the Trail Trash back together and schedule some Saturday morning rides!

That’s in addition to scheduling the inaugural ride of the Southern Arizona Knuckledraggers Hash House Harriers, set now for Sunday the 23rd of September. Yes, I launched a new chapter of the KDH3 motorcycle club (note to self: quit using words like “chapter” and “motorcycle club” … 1%ers look on it as encroaching on their turf) and am trying to get area hashers who ride motorcycles interested in a program of monthly outings. That’s more of a hash thing, and I’ll be writing about it at the Half-Mind Weblog, my outlet for all things hashing.

So what do I think about this week’s “bombshells,” the Manafort verdict and Cohen’s guilty plea? I think the two developments, along with Congressman Duncan Hunter’s indictment, will give Democratic Party candidates in upcoming elections a powerful message: the massive top to bottom corruption of the Trump administration and of the Republican Party in general is not only un-American but is hurting the country. Do I think it will bring Trump down? No I do not. The only thing that will is a massive voter turnout. A turnout to turn them out.

NPR (along with most of what we call the mainstream media) has turned its platform almost entirely over to Republicans and administration apologists, who defend Trump no matter what happens. As I listened to Morning Edition earlier today, I heard their strategy coming together. And it’s about what you’d expect: “What, are you crazy? Impeach Trump now that the economy is booming and we’re all making so much money?”

I don’t know about you, but my financial situation hasn’t improved over the past four or five years, and to me the economy doesn’t look one damn bit different than it did under Obama.

Mark my words: if it comes out, as I suspect it will, that Russia, with the approval and cooperation of Trump and key figures in Republican congressional leadership, physically altered voting results in the key states that put Trump over the top, literally stealing the election from Clinton, nothing will change. Until we vote the fuckers out. 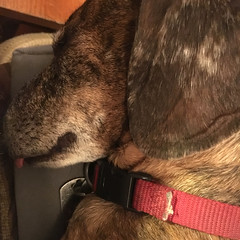 This is Mr. B last night, curled up next to his dad. The tongue is his version of REM sleep. Today is his 10th birthday … we have his medical records and so we know his date of birth. It’s a different story with Maxie, who came with nothing. We think she’s a year or two older than Mr. B, but we don’t really know.

Mr. B came to live with us last October, so we’re coming up on his first anniversary with us.

Donna gave Maxie, the auxiliary dachshund, a thorough going-over this morning, followed by a bath. I’ll be doing the same for Mr. B when I finish this post, whether he likes it or not. All part of the tick prevention program. As a reward, I plan to take them both to the feed store later this afternoon. I might even let Mr. B pick out a toy … he goes for the squeaky ones.