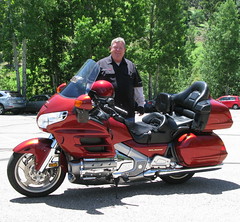 In my previous post I waxed enthusiastic about getting back on the motorcycle after a long break and a new knee. Not so fast, said the moto gods. When your bike sits in a hot garage all summer, the battery croaks. Fortunately I have a trickle charger and this morning, after applying a heating pad to my knee to loosen it up, I swung a leg over the Wing and rode to the gym for a workout on the stationary bike and the leg machines. All of which was great.

So I’m back on two wheels, if you don’t count real bicycles. I probably could have pumped up the mountain bike and taken it for a spin when I got home this morning, but I think I’ll wait until tomorrow to try that.

My final hospital physical therapy session is tomorrow, followed by a last visit with the orthopedic surgeon’s PA. Then I’m on my own, which is where the local gym membership comes in … I’ll be following the same exercise routine that worked for me after my first knee replacement, 5 1/2 years ago.

Did I mention how happy I am to be counting down these milestones? Yes!

But now we have to deal with ticks. Mr. B has always been a tick magnet, and I just assumed he was picking them up outdoors. I have observed that boy dogs rub up against the bushes they pee on. Girl dogs don’t. Mr. B, our boy dog, gets ticks. Maxie, our girl dog, never does. So you can see how I came up with that theory about boy dogs and ticks, right?

Turns out I was wrong. Maxie started getting ticks too. This morning Donna called an exterminator company she’d done some work for (she embroidered their company uniform shirts), and they told us what’s really going on—Mr. B brought ticks home with him from the dachshund rescue place and they laid eggs. One of their guys is coming over this morning to look our house over. We already know we’ll have to wash all the bedding, dog toys and beds, and the afghans and blankets the pups like to curl up on. Checking each dog over at least once a day will be our new routine. It’s a good thing we love ’em.

My Knuckledragger buds, Jim and Ed, had a fraught journey home after their weekend in southern Arizona. They rode back to our house from Bisbee Sunday morning, meaning to load the bikes on Jim’s trailer and head home. Jim would be dropping Ed and his bike off in Kingman, then driving the rest of the way to his own house in Las Vegas, an 8-hour drive plus the delay in Kingman.

The moto gods weighed in once again. One of the trailer tires had gone flat over the weekend. Jim and Ed mounted the spare and pulled out of our driveway at 11:30 AM. My phone buzzed five minutes later—the spare blew just down the road from our house. I got in my truck and drove to where they sat on the shoulder of Catalina Highway. Ed stayed with the bikes while Jim and I went looking for a tire shop open on Sunday. None were, but Jim remembered that Wal-Mart sells utility trailer tires already mounted on wheels, so we made a beeline for the old super center, where indeed Jim found two mounted tires.

When we got back to Ed and the trailer, though, it turned out the wheels the new tires were mounted on were just slightly different in depth, with the result that the new tire rubbed against the inside of the trailer’s fender struts. Fortunately, Jim had the right tools, and they were able to take the fender off and shim it inward with washers to the point where the tire didn’t rub. I wasn’t able to kneel down with them to wrestle with nuts and bolts, what with my stiff knee, but I was able to make a run to Ace Hardware for extra washers. By 2:30 PM the job was done and they were ready to drive home.

I joked about following them at least as far as Phoenix just in case, but in the end they made it home with no additional problems. Quite late, but at least it was still technically Sunday. You know, if I’m not careful, word’s going to get around my part-time hobby is rescuing stranded motorcyclists.

One quick update before I sign off: the exterminator came. He doesn’t think we have an infestation, just a few ticks here and there. He told us what to do and we’re off on a tick-killing mission, and you know what? I think the pups know what’s going on and will be happy to hold still while we check them over every day. They are good citizens, after all.