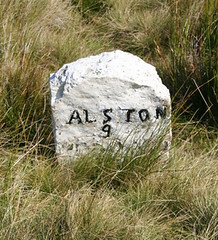 Passed another one this morning. A milestone, that is. I lowered myself down prone on the concrete garage floor to pump up the rear tire on my motorcycle (the Goldwing’s non-removable saddlebags won’t allow me to do it any other way). I got down and up without assistance.

Hey, don’t scoff. That was a biggie. My 5 1/2-year-old titanium knee had to bear the brunt of the kneeling and standing back up again, of course, with liberal use of my arms to raise and lower myself, but still. The newer (38-day-old) titanium knee cooperated pretty well, and will only get better from this point forward.

An even bigger big-time biggie awaits: I’m riding the motorcycle to book club this afternoon. It won’t be a long ride, just a couple of miles each way, more of a break-in cruise than anything else. But first, I’m going to spend 20 minutes with a heating pad on the new knee to work some of the stiffness out.

That’s another milestone, heat. Until yesterday, I’d only iced my knee. At Friday’s physical therapy session, Jenny put hot towels on my leg before sending me to the stationary bicycle, and what a difference that made … I pedaled like a madman and almost think I’m ready to tackle an actual bicycle. She said now that the swelling is gone heat is an option and can be part of my recovery. Good to know. One more hospital PT session to go and I’m on my own … home exercises and Anytime Fitness, the same routine I followed in 2013 with my left knee.

You probably think I’m overly fixated on getting back on my motorcycle. But riding again after knee replacement has always been one of my priorities. Over the past several months my right knee had gotten so bad I knew I couldn’t put surgery off much longer, but I had plans and scheduled the surgery with those in mind. One of those plans was to start a Tucson chapter of the Knuckledraggers Hash House Harriers motorcycle club by the end of August. It’s beginning to look like I’ll be able to meet this self-imposed goal, and I’m excited about that.

I started the first hash motorcycle club, the Harriers MCH3, in 1998. There were over 200 members at one point, but they were dispersed all over the world and it was almost impossible to get anyone together for group rides. I founded a chapter in Tucson and we rode monthly for a couple of years, but it’s been dormant for a while now.

A friend in Texas (Gaylord Focker, one of the original Harriers MCH3 members by the way) started another hash motorcycle club two years later: the Knuckledraggers MCH3. He inducted me as a member and I rode with the Knuckledraggers on one of their first runs, to Puerto Penasco, Mexico. Since then several active Knuckledragger chapters have formed around the country, with regular rides, get-togethers at interhash events, even patches. Gaylord got the club chartered with the American Motorcycle Association. At some point he must have had a run-in with some 1%ers, because the “MC” disappeared from the Knuckledraggers patch. But the point is Gaylord and friends were energetic and got things done with their club that I should have done with Harriers MCH3, and that’s why I’m starting a Knuckledraggers chapter in Tucson. And proud to be doing it.

Two Knuckledraggers from the Las Vegas chapter came down for the Bisbee Red Dress Run this weekend, Have Shit Will Travel and Pedi-File (sorry about those rude hash names). They trailered down (the pussies), parked in our driveway, and took the bikes from here. Here they are at our house Thursday afternoon, heading out to Bisbee.

And that’s yet another reason I decided to pump up my tires and ride today. Knuckledragger solidarity! I wish I’d been up for a ride down to Bisbee, but that’s a little ambitious. Maybe in September.

Donna’s in the kitchen making gazpacho for another hashing-related get-together tonight, our On-On Gourmet H3 cooking club, which is over at Joystick Cowboy’s house on the other side of Tucson, halfway to Phoenix almost. But I haven’t been out much since the surgery in July, and I’m ready to do things again, and with that and the book club in a couple of hours, I’m feeling back in the swim.