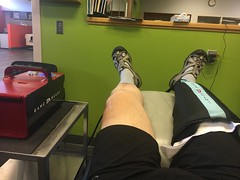 The best part of physical therapy is icing down afterward. They have this pro football rig that pumps coolant through a sleeve wrapped around your leg, chilling your sore muscles and ligaments while giving you a massage, alternately squeezing and relaxing. Heavenly!

Days drag between twice weekly outpatient physical therapy sessions. I do knee bending and stretching exercises at home on off days, but progress is hard to measure. I must be doing something right, though, because progress on PT days is dramatic. During my next to last session I was able to pedal a full revolution on the stationary bicycle, but only backward. Yesterday I was able to pedal forward, just one or two revolutions at first but finishing with five straight minutes of pedaling. The knee has to bend 105 degrees to make it over the top of a pedal stroke, so this was a major milestone. Clearly, the home exercises are helping.

On my way home from yesterday’s PT session I stopped at Anytime Fitness to renew my membership. I first joined when my left knee was replaced five and a half years ago, in order to maintain a physical therapy routine after Medicare-paid outpatient PT ran out. So same thing this time around. Medicare authorizes eleven outpatient PT sessions; so far I’ve had five.

What did people do before Medicare? Someday, I hope, we’ll be asking what people did before single-payer health care.

I went down to Pima Air & Space Museum Monday to do half a volunteer shift: I helped prep the trams, then drove and narrated the 10 AM tram tour. After helping the other driver get the 11:30 AM tour underway, I drove home. Next week I’ll be back on my regular full-day shift.

Speaking of the museum, one of our two new electric trams is in, but it’s sitting unused in the back lot. Maintenance has yet to set up a charging station (or even decide on its location, I suspect), nor have they checked out any drivers. Maybe they’re waiting for the second unit to be delivered. They don’t tell us much … as with every organization I’ve been a part of, information is currency, jealously hoarded.

My current bathroom book is Michael Palin’s “Diaries, 1969-1979: the Python Years.” It’s a fascinating read, and Palin comes across just the way he does on TV, as a genuinely nice person. Netflix has rights to all the Monty Python stuff now, including the movies, Ripping Yarns, and the rest, but except for Fawlty Towers they have yet to make any of it available to American subscribers. Some time this year, they say. Reading Palin’s diary, I’m fired up to watch. Some of it will be new to me … I never saw the Ripping Yarns shows back in the day, for example, nor do I think I ever watched Life of Brian all the way through. When Netflix does come across with the goods, I promise not to quote Python sketches here on Paul’s Thing, even though I know I’ll be tempted.