We have Throwback Thursdays and Follow Fridays, so why not Catch-Up Wednesdays? Gosh knows I have some catching up to do.

Last week’s visitors, Terry and Judy, motored up to Phoenix for InterAmericas Hash and we had a quiet weekend to ourselves. Monday our friend Angie, also a hasher, came down after InterAmericas to spend a few days with us. Polly emerged from seclusion to say hi to Angie, and here’s the proof: 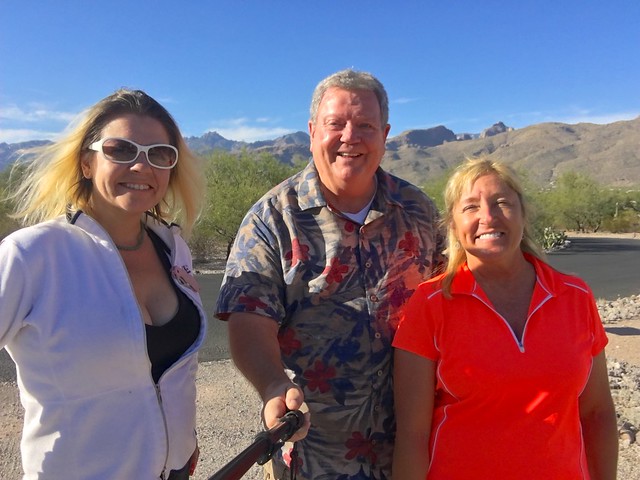 Angie and another friend who, like her, used to live here but has since moved away, Theresa, founded Tucson’s bicycle hash eleven years ago this month. I’m haring Sunday, but Angie flies home Saturday. She’s going to borrow Donna’s bike tomorrow and ride the route I have planned so I can at least tell everyone an actual founder scouted our anniversary trail. And, I hope, blessed it.

Donna and I still have stuff to put away in the home office, but there’s no hurry now. It’ll be done when it’s done, and there’ll be photos to prove it.

The termite inspector came around Tuesday morning and Donna asked him about the small holes in our driveway. We thought they were tarantula holes, but he told us they’re kangaroo rat burrows, little bitty hoppy mice who come out at night to hop around, who can go their whole lives without drinking liquid water—they get moisture from the seeds they eat.

Javelina are another story—when they’re not knocking over garbage cans to get at the treats inside, they’re looking for water. The herd in our neighborhood come around at night when people run their drip irrigation systems. When they visit our house, they root up the wet dirt under the tree outside our office window. They’re not nocturnal, exactly, but during the day they stay hidden in the shade and you rarely see them. The single female javelina in the last photo is an exception (in more ways than one, since they normally forage in family groups).

We do love the things we see through our windows!

Last night we learned the Las Vegas police have revised the timeline of the recent mass shooting, now saying the hotel security guard was shot several minutes before the gunman opened fire on concert-goers, not afterward as originally claimed. The hotel is questioning the revised timeline, but Donna and I both focused on one part of the story, namely this:

The revised timeline raises questions about whether better communication could have allowed officers to respond more quickly and take out the gunman before the attack. It remains unclear if police ever received a call for help from the injured guard.

We’re thinking the hotel sat on it, hoping to contain the situation, for squalid Amity Island town council-type reasons. We’re thinking the hotel didn’t call law enforcement until the massacre had begun, when they could have called it in a few minutes before the asshole started shooting at the crowd below. Would those few minutes have made a difference? Probably not, but if it turns out hotel management did delay calling in the security guard’s shooting there are going to be hundreds of lawsuits.

As predicted in my last post, arguments for press censorship, specifically as it applies to criticizing Trump, are beginning to circulate. I speculated those arguments would take one of these general directions:

And now, just a day later, we see it beginning:

I know, I know, the Washington Examiner’s a right-wing rag, but you watch. Kellyanne Conway’s already out there warning us that continued attacks on Trump are being closely observed by world leaders. A strategy is emerging, and we can only hope the media is prepared to resist. Keep an eye on MSNBC: as long as Maddow, Hayes, and O’Donnell keep their prime-time slots, we’re probably okay.