I Know You Are, But What Am I?

“All morons hate it when you call them a moron.”
— J. D. Salinger 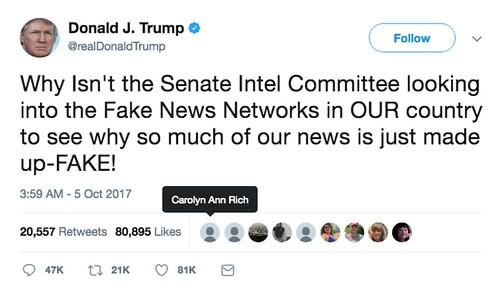 I’m not reading this anywhere yet, so it may be I’m the only one thinking it, but here goes:

As Trump and his court crank up the volume of their attacks on “fake news,” their actual agenda is increasingly clear: they want news that makes Trump look bad suppressed, possibly even outlawed, like they do for dictators and royalty in other countries. They can’t come right out and say so because even they know any such proposal will be seen as un-American, but I bet they’re working on a more palatable rationale and we’ll see Fox News and right-wing “thought leaders” advancing it soon.

Try these on for size:

The last one, of course, is the one we should all be losing sleep over.

Hope I’m wrong, but I can envision some media outlets sucking it up, telling their journalists and commentators the good of the country must come before criticism. After last night, though, listening to Lawrence O’Donnell spend an entire hour relishing the sound of the word “moron,” pronouncing it “mo-ron” like Stork in Animal House, I’m pretty sure MSNBC at least will resist … until Trump persuades its owner to fire certain troublesome hosts.

Sure, I know that sounds paranoid and overwrought, but tell it to Megyn Kelly, who was forced to take an involuntary 10-day “vacation” from Fox News after asking Trump hard questions during the first Republican presidential candidate debate in 2016.

Who needs the media anyway? All they ever do is suck up to power (Christ, just look at NPR). As individuals, we can criticize and belittle the Moron in Chief all we want on our blogs, Facebook, and Twitter … oops, not so fast!