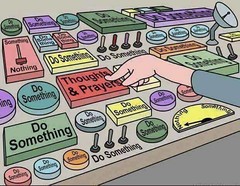 I was going to title the post “Wednesday Bag o’ Guns,” but is there anything to say about the continuing carnage that hasn’t been said, that doesn’t come across as empty and ineffectual? Nothing I can think of. If Sandy Hook wasn’t enough to convince lawmakers to stand up to the NRA, nothing ever will be. Our best hope now is for me to be appointed king. I will take the guns away. You can count on it.

A year after 9/11, the Justice Department obtained video surveillance tapes suggesting terrorists were targeting Las Vegas casinos. Local authorities were informed, but no alert was issued because the casinos didn’t want tourists scared away. I blogged about it at the time, and wondered afterward why such an obvious target for terrorism had never been attacked.

Now it has been, and the terrorist turns out to be a white guy with no known terror group ties (so far, that is, but I can’t stop thinking about the fact that he lived in Mesquite, not far from the Bundy Ranch). What’s to stop someone else doing the same thing?

Meanwhile, here’s something a friend posted to Facebook during or right after the mass shooting in Las Vegas. Rumors like this always spread during a terrorist attack and I’m not saying it’s right or wrong, just a natural phenomenon, but still interesting: 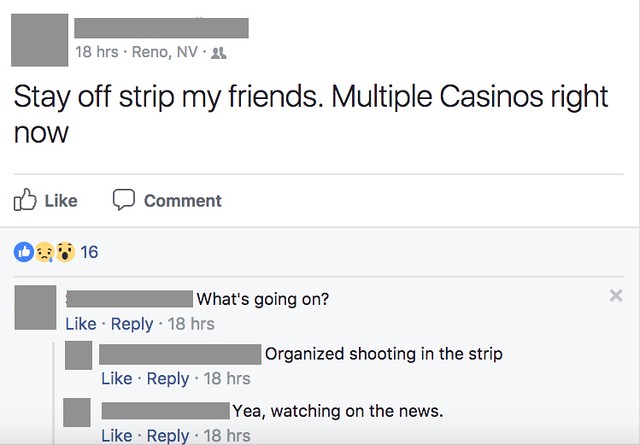 Think about it. Can you recall any mass shooting where, at some point during coverage of the attack, we weren’t told there may be multiple shooters?

Not wanting to see Spain weakened or torn apart with internal strife, I was iffy on Catalan independence, but after the Spanish Guardia Civil attacked voters in Barcelona I’m all in, and so are the Catalonians.

I understand Trump tried to phone Franco to congratulate him and apologize for any American tourists who might have gotten in the way of Spanish truncheons and rubber bullets, but upon being informed Franco’s been dead for decades he fired the staffer who bore the bad news and retreated to the throne room to tap out rage tweets.

I have a solution to the thing that’s tearing my country apart, namely black athletes kneeling during the singing of the national anthem to protest the wanton killing of innocent black men, women, and children by police across the country: how about black athletes find some other way to protest, one not involving the national anthem? Could they maybe stand in a circle at the end of the game, bow their heads, and raise their fists into the air? That would make everyone at Fox News happy, right?

I’ve been trying to get into Hillary Clinton’s “What Happened.” I bought the book after reading excerpts where she addressed problems with the campaign and her reaction to the bewildering election of the losing candidate.

So far … and I’m several chapters in … what I’m reading instead are thanks to staff and campaign workers who struggled alongside her, individually singled out by name and fondly recalled, like some ultra-long version of an Oscars speech.

This is disappointing. I find myself flipping ahead, looking for the chapter where she finally starts writing about important things. I’m taking this as a signal it’s time to move her book to the “reading episodically” shelf and re-open a neglected novel from the same pile, David Foster Wallace’s “Infinite Jest.”

Magic and Magic User (aka Judy and Terry), old hashing friends from our days on Okinawa, are visiting. They’ve been on a long road trip that will culminate this weekend in Phoenix and InterAmericas Hash. We went to the last IAH in Portland and decided to skip this one, even though it’s next door, even though many old friends will be there. We’ll have to be content seeing the friends who are dropping by before and after, and anyway, I’m haring a bicycle hash trail two Sundays from now and need to get out and scout a trail this weekend while the rest of the hash world is busy in Phoenix.

Here’s a shot of us with our friends at the air museum, where they checked out my tram tour on Monday: 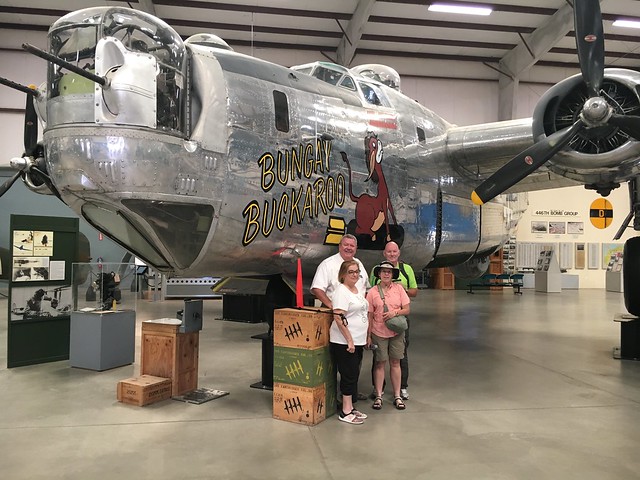 We didn’t finish putting everything back in the home office before they came, and we’ll be busy with other things for the next week or so, so no “whole room” photos yet. I did add another flying memento to the I-Love-Me wall, just for balance, and put my flight helmets on top of the bookcases. The rest of the room is Donna’s to decorate.