Not quite ready to show off the renovated home office, but here are a few progress shots:

I spent the morning putting paint, painting supplies, leftover floor planks, and tools back in the garage. Sweaty work, since all the really heavy and bulky stuff had to be lifted up into the rafters, so I’m beat. Donna got the guest bedroom emptied out and cleaned … the first of our InterAmericas Hash company arrives Sunday, old friends from Okinawa now living in the LA area. They’re stopping for a few days on their way to IAH; our friend Angie is stopping by after IAH on her way home to Tampa.

Tonight we’re going to try to burn old papers in the back yard. We have a portable fire pit with mesh sides and a cover, which we hope will keep ashes from going everywhere. I’m worried neighbors will call the fire department. We’ll start with a handful of papers so if it turns out to be a bad idea we can stop.

I have only slightly mixed thoughts about Hugh Hefner. I rarely comment here on the passing of famous people, but Hefner seems to have had an effect on nearly everyone, and nearly everyone has opinions about him. My initial reaction was, hey, he did a lot for working writers. I admired him for providing financial and editorial support to his old high school student newspaper in Chicago, right up to the end. Most of the initial comments on his passing were positive. The “Hefner was an abusive creep who exploited women” comments starting appearing soon after.

Donna and I … and many others in our Hash House Harrier circle … knew Donna Rheinhart, the “Lady in Red,” a former Playboy bunny, a seemingly well-adjusted and happy person who never said a bad word about Hefner or Playboy, at least in our presence. This morning, on the recommendation of friends, I read a long article about one of Hefner’s favorites, Dorothy Stratten, murdered by her husband in 1980, just as her acting career was taking off, a woman who had been lifted out of obscurity by Hefner and Playboy and by all accounts totally fine with her new life.

When I was a kid, girlie magazines and the whole idea that women would pose for them nude seemed, I don’t know, kind of sleazy and whorish? That ended with Hefner and Playboy. He made it respectable and mainstream, and all in all I think that’s a good thing. As far as I know, the women who posed for Playboy, who worked as bunnies in the Playboy clubs of the 1970s, who lived in and around Hefner’s mansion, did so willingly, and I bet most of them were happy to be part of that scene. You can say they were exploited and didn’t know any better, but your argument falls flat with me. I’m sure Hefner had his dark side, but who the fuck doesn’t? I’ve never heard him described as a peeping Tom pussy grabber, at any rate, and there’s one of those in the White House (not only a peeping Tom pussy grabber, but a man accused of using a 13-year old girl as a sexual slave).

There are lots of men who are worthy of my hate. Hefner was never one of them.

As for black athletes kneeling during the national anthem, I’m not the least bit confused. They’re protesting the wanton killing of black men and women by police across the nation, and protesting injustice is an honorable thing. Kneeling during the anthem is a form of patriotism, the kind that says “let’s make our country live up to its promise.” It doesn’t dishonor the flag or show disrespect to those who serve, as Fox Nation would have it. In fact, the more right-wingers play the patriotism card, the plainer their racism becomes.

Kneel on, brothers, and I’ll kneel with you … as long as you promise to help me get back up again afterward.

Related … and it’s a topic I’ve touched on here before … is the debasement of heroism in popular discourse and the media. Forced patriotism at athletic events has been around for a while, but bumper sticker support for the troops really started during Desert Storm. Today, it’s gotten to the point where virtually everyone who wears the uniform is described as a hero, and those heroes are invoked whenever disgruntled white racists want to score points against blacks who speak out about injustice, and oh by the way if being a hero is as easy as signing up, why don’t more young people do it?

Men and women in uniform know what heroism is, and they know serving two tours in Afghanistan doesn’t make them heroes. Heroes save comrades’ lives while under enemy fire, laying down their lives to protect others. Empty talk and bumper stickers debase the concept of heroism.

I flew and worked with several Vietnam War POWs during my career, good men who experienced hardships and torture I can’t even imagine, but I never heard any of them call themselves heroes. They were shot down. They suffered at the hands of the enemy. Returned to freedom, they put their lives and careers back together and moved on. 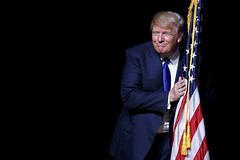 A Washington Post headline this week read McCain: Trump has never apologized for saying he was ‘not a war hero.’ I never heard John McCain call himself a war hero, so I read the article to see if he really did. Not according to the article, he didn’t. True, during the campaign Trump said McCain was “not a war hero,” and Trump has never apologized for that, but that’s not what McCain is complaining about. His complaint is that Trump disparaged his war record. Looking for a click-worthy headline, the reporter put words in McCain’s mouth.

Still, John McCain is often called a war hero. I think about the POWs I know and wonder what McCain thinks about that. All the POWs I know were aviators, as was McCain, and all were tortured, some of them horribly (which was certainly the case with McCain). They all resisted, as best they could. McCain in fact is famous for turning down special treatment offered by his captors after they discovered his father was a serving Navy admiral, insisting that any breaks he got be given also to his fellow prisoners, and that’s awesome, even heroic. But does he think of himself as a hero? Knowing these other men, I doubt it.

One thing I’m certain of, though, is that John McCain thinks of himself as a man of honor. He absolutely was during his imprisonment, say what you will about his later political career, and I honor him for it. It must sicken him to be disrespected by a shitweasel draft-dodging blowhard like Donald Trump. If I were him, I’d sabotage Trump at every opportunity, and I kind of suspect that’s what he’s doing with the time he has left.