This is our newest family member, Mr. B, riding home with us yesterday. 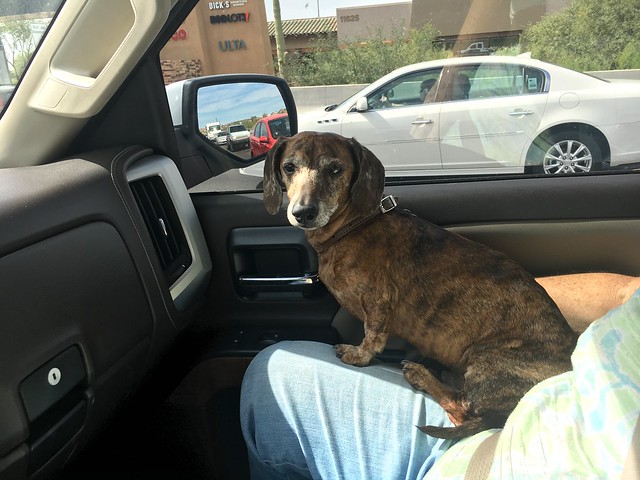 Mr. B is a 9-year-old brindle dachshund. We think he’s a standard, somewhat on the smallish side but in any case considerably taller and longer than our mini, Maxie.

We were gutted when Schatzi died, but after a while started thinking about getting another dog. We at first  thought we’d start over with a puppy, a female dachshund like Schatzi. We signed up with Sahauro Dachshund Rescue, hoping they’d get a young dog in, but they actually get a lot of seniors, and the more I thought about it, adopting a senior dog seemed like the right thing to do. I saw Mr. B’s photo a week ago, felt a pull, and well, here we are.

Yesterday morning we drove to the rescue house in Catalina to meet him. He seemed to like us right away, and even to know we were there specifically to see him. There were 30 dachshunds running around, but Mr. B sat at our feet the whole time we talked with the lady who runs the rescue. He was a one-family dog who lived with an elderly couple. The husband died some time ago, and more recently the wife, so he was homeless. Friends turned him over to the rescue lady, along with all his bedding and food and dishes and toys.

Mr. B’s two to three years younger than Schatzi was when she died earlier this year, and he plays with all the sprightliness of a puppy. He’s curious about us and Maxie and his new home, but doesn’t seem the least disoriented or upset. He and Maxie played hard yesterday, and they’re still getting along well. We gave them both baths, checked Mr. B over for ticks (found one), and watched them claim sides on the dog couch in the family room. 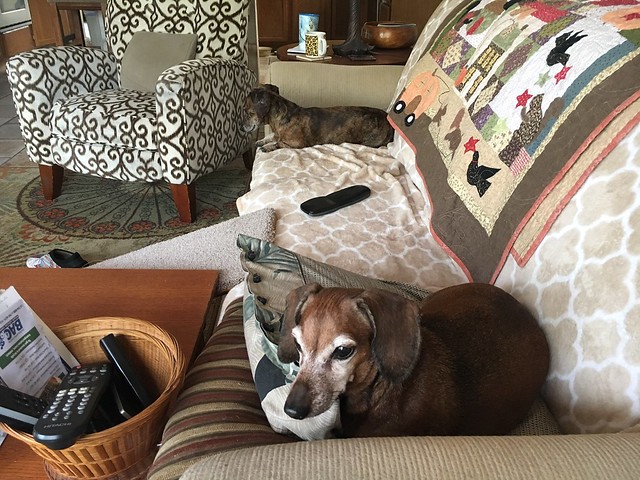 I know boy dogs mark territory, and that’s the first thing Mr. B did when we got home … outdoors and in … but I think he’s gotten that out of his system now. He slept in his own bed at the foot of our bed, but at some point in the night realized Maxie was up there with us and wanted up too. Our bed is pretty tall and Mr. B seems like a jumper, so we’re not going to let him sleep with us just yet.

I’m also closing the doggy door at night one he’s done his business and is ready for bed, at least until we get a pool pet alarm or a fence.

I put Schatzi’s old pillow on my desk this morning and invited Mr. B to sit with me, and look at that, he said okay. Here he is, on alert for coyotes and other yard invaders. 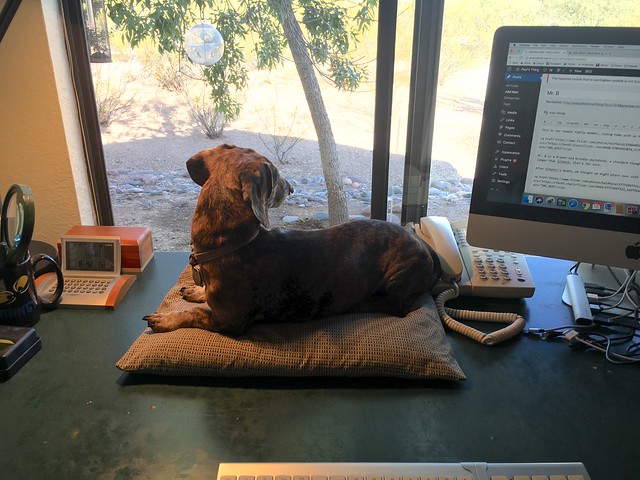 It’s our lot in life to be heartbroken and happy at the same time. That’s how I’m feeling today, missing our darling Schatzi, elated over how well our new little boy is settling in.