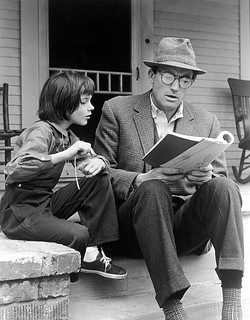 Many schools and school districts in the United States have adopted procedures to follow when parents or community members demand the removal of books from classrooms, school libraries, and reading lists. Challenged books are reviewed by committees, which recommend retention, removal, and/or alternative titles. Again and again, though, school administrators bypass these procedures, sometimes after only a single complaint or challenge.

Such is the case in Mississippi, where the vice president of the Biloxi School Board took it upon himself to pull “To Kill a Mockingbird” from the 8th grade English curriculum after students had already begun reading it. The reason? “There is some language in the book that makes people uncomfortable, and we can teach the same lesson with other books.”

The American Library Association listed “To Kill a Mockingbird” as number 21 on its list of the top 100 most challenged & banned books between 2000 and 2009, so the Biloxi ban is just the latest in a long series. People who want it banned typically cite its themes of incest and rape, its frank depiction of deep South racial division, and the use of the word “nigger.”

After years of compiling banned book news roundups, though, I’ve come to believe cultural warfare plays a greater role in book challenges and bans than anyone cares to admit, and is front and center in the latest assault on “To Kill a Mockingbird.” It’s hard to prove, because book-banners rarely acknowledge political motivations, disguising the real reason for their opposition with complaints about “bad words” and “dark themes.”

I’m thinking about creating a “culture war” category for some of the book-banning and related events I pick up on in the news and share here, cases where such motivations are clearly in play. Here’s a prime example, a news report of white nationalists terrorizing a book fair in Houston during Banned Books Week:

Together, they raised their arms in a salute of “Sieg heil.” On Sunday, September 24, about 25 men in masks and balaclavas descended on an anarchist book fair in Houston. The group call itself Patriot Front and is loosely affiliated with Vanguard Front, a fascist organization that includes Heather Heyer’s murderer, James Alex Fields, as one of its members. They rushed the door of a multicultural community center, igniting a pair of smoke bombs.

Another example of cultural warfare is the by-now obligatory annual attack on Banned Books Week. This year’s starts off with a bang:

Of all the fake holidays competing for attention on our calendars and social media “feeds” these days, far and away the worst is Banned Books Week, that annual festival of cloying liberal self-satisfaction beloved by people who like the idea of reading more than they do actually sitting down with Edward Gibbon or even Elmore Leonard.

Yes, our annual festival of cloying liberal self-satisfaction is over, but here’s an intelligent Banned Books Week wrap-up outlining some of the earlier-mentioned culture war aspects of attacks on books. It includes this chilling quote from the chief executive of the UK’s Index on Censorship: “In 2017, we can read what we like but there is a different kind of censorship in operation, not coming from the state but from an outraged public. We really need to be aware and wary of it and we’re not, sufficiently.”

Another Banned Books Week wrap-up tackles common arguments for and against keeping certain books out of the hands of young readers.

Since 2013, graphic novels and illustrated books have come to represent almost half the titles on the ALA’s annual “most challenged and banned” lists. Part of the reason is the growing popularity of graphic novels; part of it is subject matter, which often addresses sexual and gender identity.

The 10 Most Frequently Challenged Sci-Fi & Fantasy Books, per Barnes & Noble.

Five Tons of Books Seized in Vice War! From the New York Public Library, a fascinating history of Anthony Comstock and the The New York Society for the Prevention of Vice and the Society to Maintain Public Decency, created in the 1870s to stifle the flourishing traffic in what Comstock viewed as pornography: sexually risqué books, adventure stories for children, and tawdry pamphlets and pictures.

Was Dr. Seuss a racist? Work from his early career suggests he was; later in life he expressed regret for what he characterized as “wartime propaganda.” None of this, to my mind, excuses the boorishness of the school librarian who rejected a donation of Dr. Seuss books from Melania Trump, smugly informing her in a letter that Dr. Seuss’ children’s books are “steeped in racist propaganda, caricatures, and harmful stereotypes.”

A parent complained after an Atlanta area high school gave health class students a quiz about sexual preference and gender identity. Local media fanned the flames of controversy but the school stood firm, pointing out that parents were informed of health class subject matter beforehand and given opt-out instructions.

Banned books your child should read.

“There are always going to be people and always have been people who feel that other people, not them, but other people need to be protected from encountering those words.” One of America’s most famous librarians says our battle over banned books is far from over.

Sometimes book banners and self-appointed censors don’t have the patience to file formal challenges. Instead, they take direct action. This guy reminds me of an Air Force pilot I used to sit air defense alert with, who taped over the ready room’s Betamax of “Debbie Does Dallas” with “1941.”

I normally post my own reviews of banned books here, but I saw this review of Steinbeck’s classic “The Grapes of Wrath” and wanted to share it with you, since it illustrates an aspect the culture war I’ve been addressing in this edition of YCRT!, politically-motivated attacks on books about class, oppression, and rising up against authority.