“It wasn’t for trash, my bookshelves would be mostly empty.”
—Paul Woodford, unpublished memoir 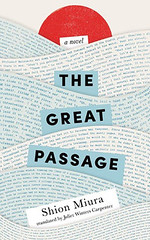 The Great Passage
by Shion Miura

Clearly, I’ve been reading too many mysteries and thrillers, where every new object or action introduced into the story comes back later in some significant way. In real life … and Japanese novels … the second thing does not necessarily follow.

Just one example: at several points in the story, Nishioka brags about how easily he could move in on Kaguya, the woman loved by his seemingly timid co-worker Majime. He finds a love letter to Kaguya on Majime’s desk, reads it, and makes a copy. Aha, I thought, he’s going to do something awful with that copy.

Not so. Nishioka stays out of Majime’s way, and the copy doesn’t come into play until the epilogue, when Nishioka and Kishibe, the woman hired to replace Nishioka after he transferred to another department in the publishing house, read it together in a strangely affecting passage that moved me deeply.

Is it coincidence I read and loved a non-fiction book about the making of dictionaries, Kory Stamper’s “Word by Word: The Secret Life of Dictionaries,” just last month? As a word lover, I learned much from Stamper’s book. I have to say I learned at least as much about dictionaries from Miura’s novel (have you ever thought about the paper dictionaries are printed on?). Along the way I learned a great deal more about Japan and the Japanese, the language and the people.

Mostly, though, I was swept away by a beautifully-told story about people passionately dedicated to their professions and to one another. This is one of the most enjoyable novels I’ve read in a long time. 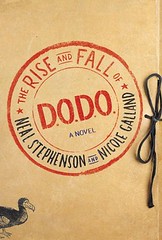 The Rise and Fall of D.O.D.O.
by Neal Stephenson & Nicole Galland

A collaboration, and I’m hard-pressed to guess which author wrote which parts, though I note that overall the novel has the feel (and heft) of a solo Stephenson epic.

The difference with this epic is the combination of the supernatural (witchcraft and magic) with near-future science fiction (the cryogenically-cooled isolation chambers that allow magic to be performed in a non-magical world).

Fantasy and the supernatural have little appeal for me, but the matter-of-fact way Stephenson and Galland mix magic with science, along with believable contemporary characters, the inevitable bureaucracy growing around what started out as a shoestring operation to explore the possibilities of magic in the modern world, and a cast of witches and anachrons brought forward from past eras, make it palatable. In fact, this is a most enjoyable read, and despite the novel’s 700+ page length, I breezed right through it.

It’s written in epistolary style, consisting of journal entries; in-house D.O.D.O. message traffic, taped conversations, and directives copied from the organization’s server; letters sent to a spymaster by an Elizabethan-era Irish witch; diary entries written by a scientist’s wife (who turns out to be a witch herself); and a fascinating Viking epic titled the Lay of Walmart.

Also, too, I liked Stepenson and Gallande’s take on messing with the past: with great persistence you can change small things, but if you seriously threaten the future, you’d better be ready to run.

“The Rise and Fall of D.O.D.O.” is a blast to read, at once playful, funny, and suspenseful … an ambitious task for any author, but Stephenson and Galland pull it off. 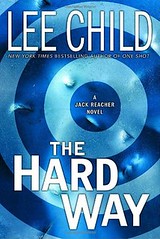 I’m working my way through Lee Child’s Jack Reacher thrillers in order. “The Hard Way,” #10, is up there with the best of them (my favorite so far has been “The Enemy,” #8), and a long way above the worst of them.

I like Jack Reacher best when he’s interacting with military and ex-military criminals, people who share his background. Lee Child seems to put in a good amount of research on military organization, missions, and weapons, so perhaps the military-themed Reacher novels are his favorites too. “The Hard Way” is one such novel, with Reacher taking on a crooked group of special operations mercenaries and besting the best of them.

Standard Reacher; happily, he stays more in character in this novel than in some others. I noted Lee Child ending chapters with one-line flourishes not seen in earlier novels: “Reacher, walking alone”; “Reacher, armed and dangerous”; “Reacher, armed with a mirror on a stick.” These effectively sum up chapters and despite their theatricality, I like. Reacher, kicking ass.

So far, too, this novel has the tightest ending, and I predict other readers will like the last line as much as I do. Number 11 already on order from my local library. 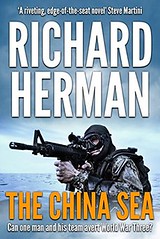 The China Sea
by Richard Herman

I preface all reviews of Dick’s novels by saying we flew together in the USAF and have been friends for more than 35 years.

I enjoy Herman’s novels, which are often (though not always) military thrillers featuring USAF pilots and aircraft. “The China Sea” focuses on geopolitics and covert military operations, with a cast of mercenary special operators and computer hackers working undercover to foil China’s plan to expand its domain to the South China Sea and Taiwan.

I’m sure he does it for sound commercial reasons, but the woman characters in “The China Sea,” though Herman sets them up as professional special operations and cyber warfare experts (recruited because they are the best in the world at what they do), could have stepped off the cover of a 1950s men’s magazine. Bechdel Test? They flunk, bigly. The cyber expert, an Australian named Alexandra, is so jealous of the rival teamed with her boyfriend she’s unable to do her job at a critical moment and has to be set straight by one of the Big Strong Men. The BSMs, of course, are fucking everything in sight and cheering one another on with catchy phrases like “Duty calls!,” unaffected by womanly doubts and emotions. Compared to the strong female characters in previous Herman novels, these were … disappointing.

This is strictly on me, not Dick Herman: I had trouble with one male character, a South Korean assassin who in the opening pages takes a long-distance shot with a sniper rifle to kill the wife of North Korean’s leader. Later he shoots and kills another woman, a spy; later still, a politically-connected man. None of the victims have any inkling they’re about to be killed. The assassin is written as one of the good guys and we are supposed to feel sympathy for him, but my sympathies don’t extend to professional assassins, no matter which side they’re on.

The story, though, zips along in satisfying fashion, and if Herman leaves a thread or two hanging at the end, that’s because he’s clearly planning a sequel. I’ll be there to read it when it comes out. 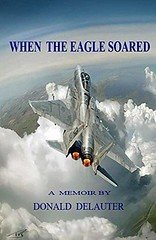 When the Eagle Soared
by Donald Delauter

This is a memoir by one of my former commanders. I read it in short segments over the course of the summer, primarily to compare and contrast what he experienced while learning to be an Air Force officer and fighter pilot in the 1950s & 60s with my own experiences in the 1970s. I also took notes for the writing of my own memoir, a project I work on between distractions.

Don Delauter is a good man, and he was a great boss. It was fun to read his observations on a long and fulfilling Air Force career. His memoir will be of primary interest to fellow Air Force officers who served with him, were stationed with him, or who flew with him, all of which apply to me.

“When the Eagle Soared” is self-published and it shows in the occasional typo or eccentrically-spelled word, but Delauter’s conversational tone carries you along, and he has a gift for explaining technical things to a general audience. I learned from it and enjoyed reading it … and I’m looking forward to the promised memoirs a few other men I served with (just as I hope they’re looking forward to mine). 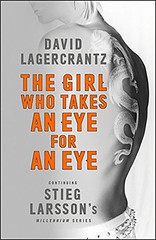 By now everyone knows David Lagercrantz is writing continuation novels based on Stieg Larsson’s original Millenium Trilogy, so I won’t comment on that. In my review of Lagercrantz’ first, “The Girl in the Spider’s Web,” I said this:

“I think Lagercrantz has successfully recreated the main characters from Larsson’s previous novels. He has also crafted a great set of villains and an appropriately elaborate plot, and in these aspects this novel seems a worthy continuation of the Millennium series.”

I went on, however, to say this:

“… my affection for Mikael and Lisbeth (and many other familiar characters from the first three novels) carried me through some clumsy, wooden passages. Lagercrantz takes shortcuts by stepping in as omniscient narrator to explain large sections of the backstory.”

I can’t say much different about Lagercrantz’ second attempt at a Lisbeth Salander novel. His main characters are still faithful to Larsson’s originals. His plot is complex enough to be Larsson-worthy. Still, something seems missing this time around. I can’t put my finger on exactly what, though.

For one thing, this novel seems short, though by page count it compares to Larsson’s originals and Lagercrantz’ first continuation. The omniscient narrator seems more intrusive, so to be fair I pulled a copy of “The Girl with the Dragon Tattoo” off the shelf and it turns out Larsson relied on that technique as well. Still, something seems missing. It’s almost as if Lisbeth and Mikael have become ghosts, going through the motions in an animatronic afterlife. The immediacy and impact of the originals, and even Lagercrantz’s first continuation novel, are gone.

This is a sign I’m losing interest and getting ready to move on, but Salander and Blomqvist still exert a pull, and I will read the next Lagercrantz continuation. If my reaction then is what it is now, I will indeed move on.