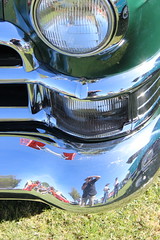 There are a few small car shows in town during the hot months, but the big three in southern Arizona happen between October and February. The season kicked off yesterday with the annual Tucson Classics Car Show at the Gregory School. Next up: the Barrett-Jackson Auto Auction in Scottsdale and the Collector Car Show on the golf course at Tubac, both in January.

The St. Gregory show officially opened at ten but I was there at nine (the school that hosts the car show changed its name a couple of years ago but locals still use its old name, the St. Gregory Preparatory Academy).

I try to get there early to beat the heat and the crowds. I could probably handle the heat, but the crowds get worse every year and so does my agoraphobia. When you can’t extend a selfie stick without poking someone in the eye or aim a camera at a cool hood ornament without someone obliviously stumbling into the viewfinder, it’s time to give up, and I bailed an hour and a half after I got there.

Before I did, though, I bumped into my friends Ed and Sue and we chatted a bit. I didn’t want to be like all the other old farts and bore them with automotive trivia they probably know better than I do, so we talked motorcycles, and speaking of which there weren’t any at this year’s show, and what the hell is up with that?

In spite of the crowds I managed to take over a hundred photos, uploading the best of them to a Flickr album titled St. Gregory Car Show 2017. If you want to see some samples before you decide whether to click the link, here are a few thumbnails: