Videos and Switches and Beards, Oh My

Speaking of YouTube, I edited the GoPro videos from last week’s motorcycle trip and put several short clips on my YouTube channel. Here’s one of the eleven videos I uploaded:

You can check them all out here.

Still experimenting with GoPro placement on the motorcycle. I have mounts on top of my helmets, but you get a lot of wind noise on the soundtrack. For these videos I used a mount on the right handlebar. On a ride through Death Valley last November I positioned the mount so that the camera was out in the wind to the right of the windscreen. Great videos, until I took a bug smack in the middle of the lens, and as with the helmet mount there was a lot of wind noise. This time I positioned the handlebar mount so that the GoPro was behind the windscreen. I like this position better, but when the sun hits the windscreen at the wrong angle you get glare, and every scratch and bug spot shows. The sound is different: more engine/transmission noise, less wind roar. Some day they’ll make a tiny camera that’ll mount inside the face screen of a motorcycle helmet. Shit, they probably already do … but I doubt I can afford one.

My cruise control kept disengaging on last week’s motorcycle trip. Cruise control on a motorcycle? You damn betcha. Ask any long-distance rider … it’s a wrist saver. As in your car, microswitches here and there will disengage it: there’s one on the rear brake pedal, the front brake lever, and the clutch lever. The culprit was the clutch lever: a bushing was worn and the lever was loose, tripping the microswitch every time it wiggled. My friend Ed has a new bushing in his cabinet of Goldwing parts, and I’m going over this afternoon to put it in.

Ed’s still recovering from the second round of surgery to repair the retina in his right eye. I’ll try to keep him from getting elbow-deep in my motorcycle today by doing the work myself. I worry about contributing to eye strain, or putting Ed in a position where he has to move his head up and down … I think he’s supposed to keep his head, and his eye, still. It must be hell for him.

On last week’s trip I started to obsess over my goatee. Whenever that happens I know it’s time to shave it off, and that was one of the first things I did after getting home Saturday afternoon. Here’s my new look, a selfie I took Monday in front of a new display at Pima Air & Space Museum. 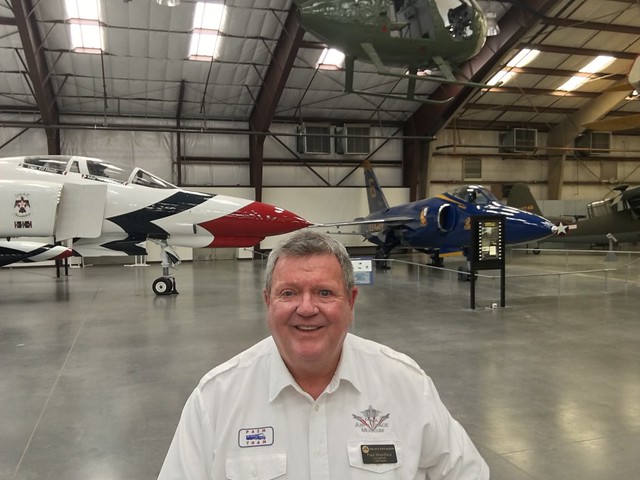 As with my face, what’s in the background isn’t all new. The Air Force Thunderbirds F-4E Phantom II has been in that corner for several years, but the Navy Blue Angels F11A Tiger was added over the weekend, just out of restoration with fresh paint and markings. Behind the two planes are cabinets of memorabilia from the two aerial demonstration teams.

I was in Las Vegas last week; Donna heads up tomorrow. She’ll be there for our grandson Quentin’s middle school graduation, and will fly home Sunday.