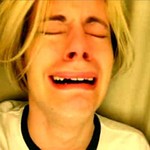 Lemme know when Kathy Griffin starts murdering people on the Metro. Then maybe I’ll give a shit about the message she’s sending. I thought the mock beheading photo was timely, appropriate, and well within the bounds of acceptable political discourse. And anyway, who’s to say HBO didn’t stage the whole thing … the photo, the social media meltdown, the apology … as a teaser for the final season of Game of Thrones? Huh? Betcha didn’t think of that!

I was dismayed to hear USAA’s going to advertise on Sean Hannity’s TV and radio shows, but then I learned they they were going to start advertising on Rachel Maddow’s show too. A while back, apparently, USAA had stopped airing ads on shows they considered partisan. Now they’ve had second thoughts and decided to start advertising again, doing business with right- and left-wing outlets. This set off another social media curfuffle (look it up, kerfuffle-head), but I’m not joining the boycott. We’ve been with USAA since I joined the military in 1973. Over the years we’ve filed a few claims, and they’ve always been great. And by great I mean great: fast, courteous, honest, the works. Claims are where it counts, and USAA’s always come through. They also pay annual dividends, and last year’s was a decent hunk of change.

We’re staying the course. If USAA wants to follow the Swiss model and do business with everyone, I’m okay with that. Hannity is a stupid man and a partisan hack, but he’s not in the same league as racist hate-mongers like Rush Limbaugh and Alex Jones. USAA, I hope you’re not going to advertise with that lot … I’ll change my decision in a heartbeat, you hear?

Surely entrepreneurs are already selling stickers and decals of Kathy Griffin holding the severed bloody head of Donald Trump. I don’t have the guts to put anything like that on my USAA-insured car, but two days ago I ordered a white oval bumper sticker with a single word on it: resist. Least I can do. Never forget that we, the people, voted for Hillary Clinton, and that the current occupant of the White House is illegitimate, literally #NotOurPresident. 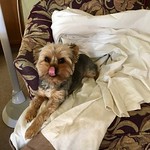 A friend is undergoing chemo and just returned home from two weeks in hospital. Her immune system is down and she can’t have pets in the house; her dog’s with us for the time being. Bella is a little jumpy yappy thing, but she’s settling down fast, taking lessons in chill from Maxie and me.

Hey, I thought about that “in hospital.” Not long ago I’d have made a point of saying “in the hospital” like a good American. But we don’t say “in the hospice,” now, do we? No, we say “in hospice.”

I think after Donna comes home Sunday we’ll start looking for another miniature dachshund. We raised Schatzi from a puppy, taught her everything she knew. So we’re not going to look for an adult dog but another puppy instead, even though it’s a lot of work. It’s worth it.