A few years ago I wrote a short post about the B-36 Peacemaker bomber. Here’s an excerpt:

… even though I was around during the B-36 bomber’s heyday I never saw one in flight. It’s not something you’d forget: it would have been akin to seeing the Hindenburg or a tidal wave. They say the ground shook when one of these took off, and I shouldn’t wonder: the sound and vibration from six twenty-eight cylinder piston engines and four turbojets, all turning and burning at full military power, should have been enough to warp the space-time continuum itself, let alone rattle windows and crockery for miles around.

They called it the Magnesium Overcast. It was built to deliver the gigantic hydrogen bombs of the early 1950s. Fully loaded the B-36 weighed over a quarter of a million pounds. It could fly from Texas to Moscow and back without refueling. It flew so high it was beyond the reach of the fighters and interceptors of the day. Jimmy Stewart flew one in “Strategic Air Command” (okay, it was a movie, but Stewart really was a bomber pilot in WWII, and a general in the reserves after the war). Some versions of the B-36 could carry and launch their own jet fighters. One was built and test-flown with a nuclear reactor inside (and a lead-lined cockpit) to explore the concept of atomic-powered bombers that could stay aloft indefinitely.

I said then I’d write more about the B-36 some day, and that day has come.

First, I want to address a common misunderstanding about the B-36, one I unknowingly passed on in my original post: the B-36, although it served as America’s first strategic nuclear bomber, wasn’t designed as one. It was meant to be a conventional bomber.

In early 1941, months before the US entered WWII, the Army Air Corps asked selected aircraft manufacturers to design a strategic bomber that could take off from North American airfields, bomb targets in Europe, and return (the driver being the possibility that England might fall to the Axis, depriving us of air bases in close proximity to the enemy). Such a goal was unachievable with existing technology, but design efforts continued, and in 1943, with the Army now hot for a strategic bomber that could reach Japan from Hawaii, Convair got a no-bid contract for an initial batch of 100 B-36s.

Six-engined super-bomber as imagined in Disney’s Victory Through Air Power, 1943

No one outside the super-secret Manhattan Project knew about the possibility of nuclear weapons during the development of the B-36. As far as anyone at Convair (then Consolidated Vultee Aircraft Corporation) or the Army Air Force knew, the B-36 was to be a conventional bomber, albeit one with exceptional range and an 86,000-pound payload.

The XB-36 prototype rolled out in August 1945, a few months after VE Day. It was not to fly until August 1946, almost a year after Japan surrendered. By then, of course, America had its first generation of atomic bombs, and the B-36, which could carry these weapons with few modifications, almost by default became the first strategic nuclear bomber.

Convair built 384 B-36s between 1946 and 1954. The USAF operated the giant aircraft from 1949 to 1959 in two primary roles: as a delivery platform for atomic (and later) hydrogen bombs and for strategic reconnaissance. Designed to face WWII-era fighter and anti-aircraft artillery threats, the B-36 became increasingly unsurvivable in the jet and missile age, and in 1955 the USAF began taking it out of service, replacing it with the new Boeing B-52 Stratofortress. By December 1958 only 22 B-36s remained on active duty; the last one went to the Boneyard in February 1959. Only five airframes survive, all in the USA: four on display at aviation museums and one in pieces at an Ohio farm.

Some interesting facts about the B-36: 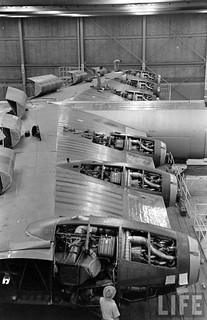 The basic crew was 15, although the RB-36D specialized photographic-reconnaissance version carried a crew of 22. As with the B-29 and B-50 bombers, there were pressurized compartments forward and aft, connected by a pressurized tunnel. Crewmembers laid on a wheeled cart and pulled themselves through the tunnel between compartments. The aft compartment contained six bunks and a galley.

Beginning with the B-36D model, four General Electric J47-19 jet engines were added (and subsequently retrofitted to older models of the aircraft). The jet engines were used for takeoff and climb, and occasionally in flight. Later in the Peacemaker’s career, defensive gun turrets were removed to lighten the aircraft (this was called the “featherweight” conversion), enabling it to fly higher and faster (achieving a top speed of 423 miles per hour while cruising at 50,000 to over 55,000 feet).

The B-36, designed before the advent of aerial refueling, carried 30,600 gallons of fuel. This was enough to stay aloft for up to 40 hours, giving the aircraft a ferry range of 10,000 miles. The combat radius of the B-36, however, was less than 4,000 miles, which meant it could not reach targets deep inside the Soviet Union from US bases and return; combat plans envisioned one-way missions launching from US bases, attacking targets inside the Soviet Union, then landing at bases in Europe.

B-36 aircrews worried that the comparatively slow-moving bomber would not be able to fly out of the blast radius of the large-megaton weapons they were supposed to drop, and tests conducted in 1954 bore out their concerns: at distances believed typical of wartime delivery test aircraft suffered extensive flash and blast damage.

Survivability, along with combat range issues, were additional reasons for replacing the B-36 with faster, air-refuelable B-52s. 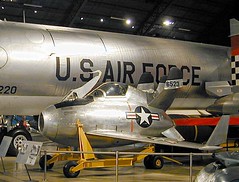 In 1948, to provide long-range strategic bombers with built-in fighter protection, the USAF began experimenting with parasite fighters (a concept employed by US Navy airships in the 1930s), flying the experimental McDonnell XF-85 Goblin from a trapeze mounted underneath a B-29 mothership. The idea was that the tiny Goblin, with its wings folded, could be carried inside one of the B-36’s bomb bays, then lowered into the airstream and launched to help defend the bomber over the target area. After fighting off attacking MiGs, the Goblin would return to the mothership, hook onto the trapeze, fold its wings, and be retracted back into the bomber (where it could be refueled and rearmed for the next round of attacking MiGs).

The Goblin program was cancelled in 1949, but the experiment led to the Fighter Conveyor (FICON) program. As conceived, a modified B-36 mothership would carry an F-84 Thunderjet fighter to the vicinity of a target, then deploy the faster, more maneuverable fighter to deliver a tactical nuclear bomb. Mission complete, the F-84 would return to the mothership to be carried home.

The FICON program was actually implemented in 1955 with 10 modified RB-36 motherships and 25 RF-84 Thunderflash fighters. The objective of the only USAF bomber parasite fighter program to ever see actual service had by then changed from attack to surveillance: the RF-84, a photoreconnaissance fighter, would use its speed and agility to overfly and photograph heavily defended targets while the mothership loitered outside the range of enemy defenses. Although FICON RF-84s did not have folding wings and could not be carried internally, the tailfin and cockpit were enclosed in the belly of the B-36, allowing the pilot to stay in the bomber’s crew compartments until needed. In 1956, with the introduction of the U-2 and the phaseout of the B-36, the FICON program was terminated.

In addition to building several bomber and strategic reconnaissance models of the B-36, Convair spun off two new aircraft from the basic design: the one-off XC-99, a double-decker troop carrier/cargo variant operated by the USAF from 1949 to 1957; and a single YB-60, a swept-wing redesign powered by eight jet engines, which in 1951 competed for the replacement strategic bomber contract later won by Boeing’s B-52 (two YB-60 prototypes were contracted for but only one was built to completion and flown).

In the mid-1950s, a B-36H which had been damaged by a hurricane was converted to carry a nuclear reactor. The NB-36H Crusader was created for the Atomic Energy Commission’s Aircraft Nuclear Propulsion program, and was meant to show the feasibility of a nuclear-powered bomber. The reactor, while not actually powering the NB-36’s engines, was operated in flight (as you might expect with many precautions: the self-contained reactor unit was carried inside a shielded bomb bay aft of the wings and operated by two nuclear engineers from the safety of an 11-ton rubber- and lead-lined crew compartment at the forward end of the aircraft). The NB-36H flew 47 test flights and accumulated 215 hours of flight time (89 hours with a hot reactor) between 1955 and 1957. 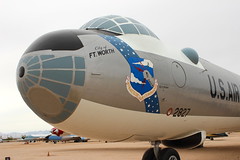 Even to this day, I sometimes hear the B-36 called a “billion-dollar blunder.” To my utter lack of surprise, the phrase originated in 1947 during a budget battle between the US Navy and the US Air Force. The Navy, which advocated the acquisition of a large aircraft carrier equipped with nuclear-armed fighters, fought bitterly against funding US Air Force strategic nuclear bombers, arguing that money set aside for the USAF’s B-36 program should be transferred to the Navy and the construction of a super-carrier to be called the USS United States. The Navy lost that fight, but by the Korean War was building large carriers similar in concept to the cancelled USS United States, equipped with aircraft capable of flying many different missions including nuclear attack. By then, however, Congress had decided that the USAF and its Strategic Air Command bombers were central to the nation’s nuclear deterrent force, and the budget battle … that aspect of it, anyway … was over.

The B-36 filled America’s post-WWII need for a strategic bomber capable of striking the USSR, thus serving as a nuclear deterrent. Complex and expensive, it was hardly a blunder. It did what it was designed to do, without once dropping a bomb (nuclear or conventional) in anger, and when better, more survivable and flexible bombers became available, it was replaced.

Damn, though, I wish my childhood memories included the earth-shaking roar of a B-36 taking off with six turning and four burning.*