I corrected a couple of minor errors in the original post. I have since learned more about early presidential aircraft, and will share that knowledge in a separate post, coming soon. —Paul 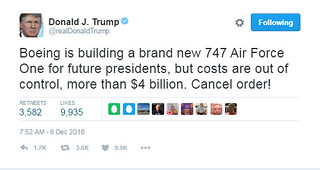 When I read the president-elect’s now-famous tweet a few days ago, my thoughts turned to two presidential fleet aircraft I show visitors at the Pima Air & Space Museum in Tucson, Arizona.

The first is a former Air Force One used by Presidents Kennedy and Johnson, a propeller-driven VC-118. The second is one of the first jet aircraft assigned to the presidential fleet, a VC-137. This aircraft, one of three purchased together near the end of the Eisenhower administration, is an off-the-shelf Boeing 707 outfitted as an executive transport. The USAF designated these three aircraft VC-137As. Shortly after entering service they were upgraded to VC-137Bs by the addition of more powerful engines. These three aircraft were known as SAM (Special Air Mission) 970, 971, and 972.

SAM 970 became the first jet Air Force One, used by both Presidents Eisenhower and Kennedy. Its sister ship, SAM 971, is the one on display at our museum. It was a backup, never carrying a sitting president and thus never an Air Force One. It did, however, become famous as Freedom One, the airplane that brought the American hostages home from Iran in 1981.

As a side note, the famous “Air Force One” call sign was not introduced until 1953 or 1954, after Eisenhower’s Columbine II, flying under the call sign Air Force 8610, and a commercial flight, call sign Eastern 8610, entered the same airspace together, causing momentary confusion on the part of air traffic control. This incident led to the adoption of the Air Force One call sign for aircraft carrying sitting presidents of the United States, the idea being that presidential flights should use a distinctive call sign.

Most people, when they remember JFK going places on Air Force One, picture him and Jackie emerging from a blue and white Boeing 707. True, his primary Air Force Ones were 707s. The first was SAM 970, the VC-137B; the second, added to the fleet in 1962, was SAM 26000, a VC-137C (an improved version of the 707 with longer range). Our old prop VC-118A Liftmaster shared the presidential hangar with the jets, however, and it was JFK’s Air Force One on many occasions, notably for trips home to Hyannisport. LBJ frequently used it for flights to Austin, near his Texas ranch. Both destinations had short runways, unsuitable for the jets.

These photos show some of the earlier paint schemes used by presidential aircraft. FDR’s Sacred Cow was silver (later silver and white); Truman’s Independence was silver, white, and blue (with Eagle heads on both sides of the forward fuselage); Ike’s Columbines were plain polished aluminum. When JFK first flew on our museum’s VC-118A, it was silver below and white on top, as in the photo. When Eisenhower’s three Boeing 707s were added to the fleet, they were silver below and white on top, with bright red swoops on the nose and tail, and that’s how they were still painted when Kennedy first flew on them.

According to Pima Air & Space Museum lore (partially confirmed by Wikipedia and other sources), Kennedy thought Eisenhower’s red-nosed 707s looked too imperial. He put Jackie in charge of coming up with something both presidential and subtle; she in turn hired Raymond Loewy (the famous industrial designer), who worked with the first family to come up with the paint scheme still used today: polished aluminum on the wings and lower fuselage with slate blue under the nose and on the engine nacelles; a gold stripe below the cabin windows; a darker shade of blue (cyan) above the cockpit, down the middle of the fuselage, and on the tail; white on top of the fuselage; presidential seals on both sides of the nose. This paint scheme was first used on SAM 26000, the VC-137C aircraft delivered in 1962. The older prop-driven VC-118A, the one on display at our museum, along with other presidential fleet aircraft, was later repainted in the new scheme.

Other aircraft assigned to the presidential fleet but not primarily used as Air Force Ones (aircraft used to transport the vice president and other high-ranking American officials) wear a slightly different paint scheme, the same one used on Pima Air & Space Museum’s Freedom One VC-137B: silver on the bottom with cyan toward the nose, a gold stripe below the cabin windows, white on top, no presidential seals. Presidents, I should note, sometimes use these aircraft as Air Force Ones when the primary aircraft are not available, or if another type of aircraft is more suitable for destination airports.

Here’s a photo of SAM 26000, the long-range VC-137C purchased in 1962, with the paint scheme designed by Jacqueline Kennedy and Raymond Lowey. Alongside, for comparison, a photo of SAM 28000, one of the two VC-25 used by presidents today, and which the Air Force and Boeing hope to replace with improved and more fuel-efficient versions of the Boeing 747 (see President-Elect Trump’s tweet above).

Where are the historical Air Force Ones today?

FDR’s VC-54, the Sacred Cow, remained part of the presidential fleet into the 1950s, then was used as a staff transport by the USAF until it was retired in 1961. Today it is at the National Museum of the USAF in Dayton, Ohio. Truman’s Independence, a VC-118 like the one on display at my museum, served on with the USAF until 1965. Today it too is at the USAF Museum, along with one of Eisenhower’s VC-121s, Columbine III. I’m not sure when our museum’s VC-118 last flew; after the Johnson years I’m guessing its fate was similar to Truman’s Independence, serving out its days as a transport for senior USAF officers before being retired.

Of the first three presidential jets, the VC-137As (later upgraded to VC-137Bs) purchased during the Eisenhower administration, only two survive. SAM 970 flew as Air Force One for Presidents Eisenhower and Kennedy; today it is on display at the Museum of Flight in Seattle. SAM 971, which served as a presidential backup and later as Freedom One (remember the American hostages coming home from Iran?), is on display at Pima Air & Space. SAM 972, also a presidential backup, sometimes flew as Air Force Two, carrying the vice president; it, like SAM 971, stayed in the fleet as a non-presidential executive transport for many years, but was eventually retired and scrapped.

The two long-range Boeing 707s that joined the presidential fleet in 1962 and 1972, VC-137Cs SAM 26000 and 27000, served presidents from Kennedy to Clinton. These are, undoubtedly, the best-known Air Force Ones. SAM 26000 flew Kennedy to Berlin and later Dallas; it is the same plane in which Johnson took the oath of office after JFK was assassinated. It remained in the presidential fleet until 1998 and today is on display at the USAF Museum in Ohio.

SAM 27000, the second VC-137C, was first used by President Nixon in 1972. It is the plane that flew him back to California after he resigned, switching from the Air Force One call sign to Special Air Mission 27000 in mid-flight. SAM 27000 flew more often as Air Force One for President Reagan than any other president, and after its retirement in 2001 was placed on display at the Reagan Presidential Library in California.

I’ve referred throughout this post to the presidential fleet, shorthand for the aircraft operated by the US Air Force’s 89th Airlift Wing at Joint Base Andrews near Washington DC. The wing is tasked with providing airlift and logistics for the president, vice president, military combat commanders, and other senior leaders. In addition to the two current Air Force Ones, SAM 28000 and 29000, the wing operates a fleet of other VIP aircraft ranging from C-20 Gulfstream executive jets to widebodies like the C-32, a modified Boeing 757.

I suppose I should return to the item at the top of this post, President-Elect Trump’s tweet about canceling the order for two new Air Force Ones. Whether he was blowing off steam or making an official announcement is yet to be determined; certainly at some point the existing VC-25s, which have been in service for 26 years, will have to be replaced. Unlike the first jet Air Force Ones introduced during the Eisenhower administration, modern presidential aircraft are highly specialized and modified, about as far from off-the-shelf as one can get. Their replacements will be even more so, and consequently expensive. I’ll quote a recent Wikipedia update on future replacement issues:

The VC-25As are expected to be replaced, as they have become less cost-effective to operate. The USAF Air Mobility Command has been charged with looking into possible replacements, including the new Boeing 747-8 and the Airbus A380. On 7 January 2009, the Air Force Materiel Command, as part of its Presidential Aircraft Recapitalization Program (PAR), posted a notice to survey and identify potential suppliers of the next generation of Presidential airplane to begin service in 2017. By 28 January 2009, the deadline for responding to the survey notice, the European Aeronautic Defence and Space Company (EADS) announced that it would not participate in the program leaving Boeing the sole possible provider with either its Boeing 747-8 or Boeing 787 Dreamliner being proposed. On 28 January 2015, the Air Force announced that the Boeing 747-8 will serve as the next presidential aircraft. On 6 December 2016, President-elect Donald Trump tweeted his opposition to the Air Force One replacement due to its high cost of “more than $4 billion”. [sic] The U.S. Government Accountability Office estimated the total cost at $3.2 billion, and U.S. Air Force’s projected budget is nearly $4 billion. To date Boeing is on contract for preliminary development worth $170 million.