Watching TV with My Back to It 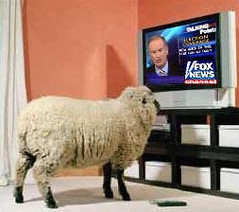 Petty annoyance: the gym patron who sits on the equipment with his yap hanging open while watching Fox News. Do your damn reps and move on, please, others are waiting. I was all set to loudly remind him to wipe down the bench of the leg press when he finally got off, but he whipped a rag out of his pocket and did it before I could embarrass him. Small blessings.

Since the election, the wall monitors at my local Anytime Fitness are set to Fox News. It’s like North Korea, where there’s just the one channel. Usually there are other patrons watching Fox as they work out, so I know better than to track down the remote and turn the monitors off, which is what I do on the rare occasions I have the place to myself.

I try to ignore the TVs at the gym, but today the volume was up and I couldn’t help overhearing the hosts and their guests. In the hour and twenty minutes I was there, all they did was hammer away at Democrats and Hillary voters for being whiny crybabies. Trump won, get over it. And so on. I wonder why leg press guy’s mouth was hanging open. Surely this isn’t the first time he’s heard that message.

He was probably the owner of the pickup truck crookedly backed into the parking slot out front. Which is my way of changing the subject to the eternal debate over backing in versus pulling in. 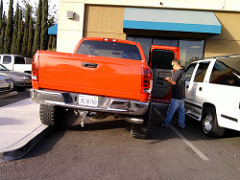 We used to have a pickup, a long-bed ’94 Ford F150, but it had a remarkably tight turning radius for a truck and I always pulled into parking slots nose first. When I saw other pickup drivers backing in, I’d judge them.

Since backer-inners were usually young men, I assumed they were showing off, as young men do. Backing in is positioning yourself for a quick getaway later, right? Maybe these guys pictured themselves as rugged types, like gunslingers who always sit facing the door in case Rattlesnake Pete comes into the saloon. Maybe they wanted to be seen as rogue tactical operators, Jason Bournes who might have to sprint for their trucks at a moment’s notice, CIA goons on their tail.

Last year I bought another long pickup, a 2014 GMC with an extended cab. The new beast doesn’t turn as tightly as the old beast, and now I know why other men back their trucks into parking slots. It’s not because they’re poseurs, it’s because it works better.

When you nose in you need a couple of feet either side of the front fenders, because as you crank the steering wheel the nose arcs to the left and right. The pivot point is way behind you, back at the rear wheels. If other cars are in the slots to either side, you can’t help coming within inches as you try to maneuver into the slot. Usually there’s not enough room get straight the first try; you have to reverse and swing the nose around before you’re aligned well enough to pull in. If there isn’t enough room to back way up (as there often isn’t) you may never get straightened out. You wind up parked crooked, making it hard on the folks parked next to you.

When you back in, the rear of the truck doesn’t need side room. The rear wheels are the pivot; it’s the front end arcing from side to side out in the aisle of the parking lot where there’s room to do it, and it’s easier to align yourself with the parking slot. It just works better.

All of which is to explain why I have become a backer-inner. If other drivers judge me, fine, I understand. To others it’ll always look like a poseur move.

Boy, that “others” packs a punch, doesn’t it? Others as in drivers of smaller, inferior cars, the piddly-ass kind that nose into parking spaces like little fraidy cats. Others as in girly-men. Others as in “not me.” Notice I said I no longer pass judgment on backer-inners. I didn’t say I no longer judge!

One thought on “Watching TV with My Back to It”