Re Trump’s shouty speech: loved this tweet in spite of not knowing what “underpants-gnoming” meant: 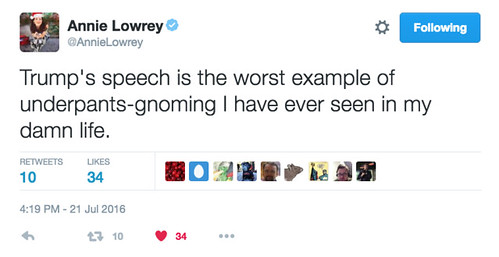 Naturally, I looked it up. Google steered me to this video clip, which explains it perfectly:

In the random but disturbing thoughts department, it hit me this morning there’s been virtually no media coverage of preparations for next week’s Democratic National Convention in Philadelphia. Not a peep, and I scan the New York Times and watch network and cable news daily. During the two weeks leading up to the Republican National Convention in Cleveland, there was plenty of coverage: speculation on whether there’d be mass protests in the streets, how law enforcement would handle it, how the stage inside the venue was going to be set up, who the scheduled speakers were going to be, on and on. What do we know about preparations for the DNC? Pretty much zip.

Does this indicate Hillary Clinton’s nomination and acceptance will not be as exhaustively reported as Donald Trump’s? A cynical person might think so. I am such a person. Can you see MSNBC or CNN cutting away from Hillary’s acceptance speech for a “breaking news” report on Trump being sighted at a New Jersey strip mall? I can.

Trump has had wall-to-wall coverage, not just this week but for almost three weeks running. He’s taken up so much oxygen I can’t help picturing Hillary as a fish out of water, gasping in the thin air. Let’s hope our media overlords grant the other side at least one week of equal treatment.

Another disturbing thought: the effect on voter turnout if the DNC turns into a shit show with mass civil disobedience and a heavy-handed police response. I hope I’m wrong, but Sanders supporters have threatened to disrupt the convention, and they’re not alone: remember all the times Black Lives Matter protesters tried to upstage Hillary Clinton at speeches and fundraisers? Tell you what, she’d better be in top form, Jesus and Solomon rolled into one. Trump can get away with threatening protesters. She can’t.

Well, whatever. A lot of folks are heavily invested in anger and hatred, whipped up by the rhetoric coming out of Cleveland. I know Hillary Clinton will do her best to calm the national waters next week. Let’s hope the spirit of doing unto others as we would have them do unto us has more public appeal than the spirit of fucking over all the sons of bitches we don’t like.