I always tell visitors to come back to the Pima Air & Space Museum at least once a year. There’ll be new stuff, I say. And it’s true.

The Republic F-105D Thunderchief that’s been on display for many years had become an eyesore, its paint brutalized from constant exposure to the desert sun. I was relieved when the restoration crew towed it back to the hangar for new paint, delighted to see it out in public again, looking better than new.

The RE on our Thunderchief’s tail indicates it’s a Vampire, that is to say a 44th Tactical Fighter Squadron jet, from the days the Vampires flew out of Takhli Royal Thai Air Base during the Vietnam war. I too am a former Vampire: I flew 44th TFS F-15s at Kadena Air Base in Okinawa, Japan, where the squadron is now based (and still flying F-15s). I’ve always felt an affinity toward our old Thud, and that’s the reason why. Big Sal, lookin’ good.

About a month and a half ago I noticed a Marine EA-6B Prowler parked on the ramp by the restoration hangar. This aircraft is entirely new to the museum, and yesterday they towed it out and put it on display. Between tram tours, I walked over and took a few photos. As you can see, a restoration volunteer was still putting a few finishing touches on it.

The Grumman EA-6B Prowler is an electronic warfare variant of the A-6 Intruder, with an enlarged cockpit housing a crew of four: one pilot and three electronic countermeasures operators. It was flown by the Navy and the Marines, but today the Navy has transitioned to the EA-18G Growler, and only the Marines still fly the Prowler. In a couple of years the Marines too will replace the last Prowlers with Growlers.

You can click on any of the small photos above to see the full sized originals on Flickr, and you should check out the last photo, the one of the Prowler’s nose, which shows all the combat deployments this particular aircraft flew.

My last tram tour of the day wasn’t particularly full, so I decided to have some fun with our visitors. I got on the mic and asked if they remembered Ellen DeGeneres taking a selfie with a bunch of movie stars at the Oscars a couple of years ago. Everyone hollered yes, so I whipped out the selfie stick I’d prepared beforehand and hidden near the driver’s seat. I told them it’d be on my blog, and I keep my promises: 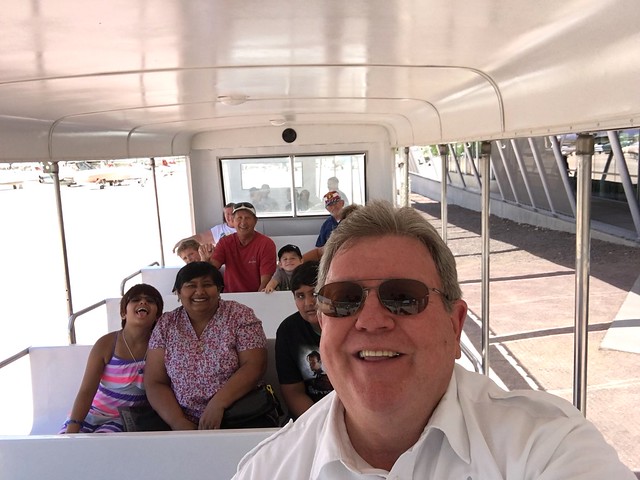