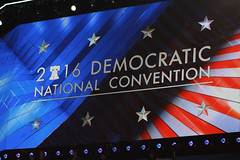 Last week I watched prime time coverage of the RNC in Cleveland on network TV and the cable channel MSNBC. The commentators talked over most of the minor speeches, interrupted during the major ones, and kept cutting away for commercials. I wish I had thought of C-SPAN, but I hadn’t. Then, on the first night of the DNC in Philadelphia this week, I saw some positive tweets about C-SPAN’s convention coverage and decided to give it a try. What a difference! C-SPAN’s airing the DNC in real time, no commentary, no commercials. That would have been the way to watch last week’s RNC, had I known.

So far I’ve watched two nights of DNC coverage on C-SPAN. Every now and then I’ll click over to MSNBC. The difference is stark. MSNBC and the other cable channels are pushing the idea the Democratic Party is falling apart. Their commentators keep saying so, often talking over convention speakers. Their cameras focus on belligerent Bernie Sanders supporters. C-SPAN, by contrast, doesn’t interject commentary and its cameras are neutral. You see the overall picture, not just isolated troublemakers in the crowd, and dissension takes its proper place. It’s there, but not nearly as disruptive as MSNBC would have us think. As far as I can tell, this DNC is more unified and hopeful than some of the past ones.

Another thing the cable channels do: when they cut away from speakers at the DNC, it’s often to show clips of Trump’s speech at last week’s RNC. Hey, Rachel, Trump got all the oxygen last week and we didn’t hear a peep about Hillary Clinton. This week it’s Hillary’s turn. Let her have some air, will you?

Impressions: I was wowed by Michelle Obama’s speech Monday night, wowed again by Bill Clinton last night. Wowed by the diversity of the people on the convention floor, who collectively look a lot more like America than the sea of middle-aged whiteness on display in Cleveland last week. Wowed by the diverse and inspirational backgrounds of the minor speakers. Wowed by the optimism and positiveness on display in Philadelphia, in sharp contrast to the anger and resentment in Cleveland last week. I hope the difference comes through on network and cable TV coverage, in spite of their efforts to play the “both sides” game.

Okay, Bill Clinton, the elephant (or should I say donkey?) in the room. Apparently Rachel Maddow and other MSNBC commentators had issues with his speech last night. I don’t know what they said during Bill’s speech, because I was watching it on C-SPAN, but I clicked over to MSNBC after the convention went into recess for the night, and that’s all they were talking about. They apparently didn’t believe Bill Clinton, in light of his well-known infidelities, could have been sincere in his admiration of Hillary. But why couldn’t Bill Clinton have been sincere? Why can’t they believe his love and admiration is genuine?

Many husbands play around. Many wives, too. Some couples break up afterward, but some stay together. Forever. Is their love for one another genuine? I have to believe it often is. The Clintons have been married more than 40 years. The Trumps have been married less than 12. Previously, Donald Trump had two other wives, and his first marriage ended at least in part because he was having a very public affair with the woman who became his second wife. Two other prominent speakers at the RNC in Cleveland, Rudy Giuliani and Newt Gingrich, have similar histories. The same cable TV commentators who can’t utter Bill Clinton’s name without also reminding us of Monica Lewinsky never say a word about other politicians’ sexual infidelities. It’s almost as if the Clintons are expected to live up to a different standard than other political figures.

I’m heartened to see on Facebook that many conservative family members and friends are also watching the Democratic Convention, trying to be fair. Many of them were as wowed by Michelle Obama and Bill Clinton as I was. Just as important, at least to me, I hope people are getting the word about C-SPAN and turning away from network and cable TV coverage.