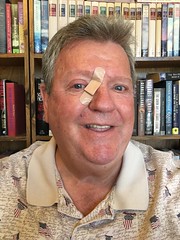 From the political to the personal. That’s how I roll here at Paul’s Thing.

Yes, the beard is gone. Like an infant discovering its tongue, I’d become obsessively aware of the hair on my face, touching it, scratching at it, thinking about it day and night. The symptoms were like a series of signposts, and they read: “A shave / That’s real / No cuts to heal / A soothing / Velvet after-feel / Burma-Shave.”

By the way, this must be the sixth or seventh beard I’ve shaved off. Donna hasn’t noticed once, and her record is unbroken.

So what’s with the bandage? No, it’s not a shaving cut. It’s the result of having another basal cell carcinoma removed, this one near my right eye. I went to a doctor who specializes in Mohs surgery. It took a while, what with the doctor removing a layer, leaving to examine it under a microscope, coming back for another slice, etc, but Donna says once it’s healed I’ll be as pretty as Muhammad Ali. She should know: she had a skin cancer removed from her nose with Mohs surgery last year. There’s no scar at all, and she’s even prettier than Ali in his prime.

When I left the doctor’s office yesterday morning I was wearing a thick gauze pad and plenty of tape. The dressing was supposed to stay in place two days, but part of the tape covered the inner corner of my eye and drove me crazy. Not only that, my glasses slid down to the end of my nose and I had to tilt my head way back to read. One day was all I could stand. It’s not bleeding, so thin bandages . . . which I was supposed to start wearing tomorrow anyway . . . will have to do. The things we do for vanity!

Our daughter Polly’s been living with us for more than a year. I’m not as upset by this as I was six months ago, because at least she has a job now and isn’t underfoot all the time. Over the past few months she’s interviewed with a few Phoenix-based human resources outsourcing companies, but none of the jobs have panned out. We try to be optimistic, but suspect there’s a red X on her record from a previous job in that career field . . . either that or it’s her lack of a college degree in a field where virtually everyone else has one.

How much longer is this going to go on? We don’t know, obviously. Polly’s dating again, and maybe that’s her escape plan. The job she has, working as a cashier at Ace Hardware, doesn’t quite pay enough for her to move into her own place, or at least that’s what Donna maintains. I wonder, though . . . Tucson is full of people working low-paying jobs and somehow managing to make ends meet.

I’m sharing some pretty personal stuff with you here. I hope you realize I’m not complaining . . . I’m mostly thinking out loud, wondering when our daughter will finally become a person in the world.

I’m through with the Republicans and their hatefest of a convention. I snarked on Melania Trump’s plagiarized speech, and so did everyone else. Sadly, everyone else is still going on about the goddamned speech, ignoring the truly frightening excesses on display in Cleveland, and now I’m embarrassed to have been part of the chorus. Republicans are going to do their thing no matter how much we try to shame them. It’ll be the Democrats’ turn next week, and maybe Hillary can calm things down and get a positive bump while she’s at it. Hey, it could happen! Not that it’s likely to. . . .

I was taught to indicate a trailing-off thought by ending a sentence with a period followed by an ellipsis. . . . Yes, that’s how it’s done, with a full space after the period and thin spaces between the dots of the ellipsis. When I do it, though, it looks fussy and pedantic. Why can’t we just trail off without the period? Like this . . .