The Abyss Has No Bottom 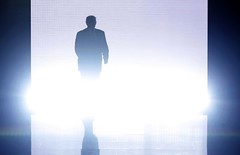 I take my title from Nancy Nall’s daily column: “The abyss really has no bottom, does it?” Yes, she’s referring to Trump, specifically the plagiarized speech Melania Trump read on nationwide TV last night, an act of chutzpah almost as breathtaking as Donald Trump’s appearance in a field of blinding light and mist, itself surely plagiarized from a Watchtower pamphlet’s rendering of Christ greeting the chosen at the gates of Heaven.

Although we skipped most of the Republican Convention’s opening night, we made sure to watch Melania’s speech, which we figured would be the high point of the evening (I bet Donna Trump would interrupt Melania on some pretext or another, and I’m still in shock he didn’t).

I’ll be honest: at the time I didn’t realize Melania had copied parts of Michelle Obama’s 2008 Democratic Convention speech. When it was over, though, I checked in on Twitter, where a lot of people had picked up on the similarities, Googled the original, and had begun to post side-by-side comparisons.

Later that night I turned the TV to MSNBC, where Melania’s plagiarized speech was the number one topic. This morning, listening to NPR as I brushed my teeth, catching a bit of Fox News at the gym, and scanning the New York Times online, it seems to me the mainstream press is still making up its mind whether to call plagiarism by its name or to soft-pedal it. I’m gonna predict they’ll go easy on Melania in the spirit of “balance,” and that they’ll be live-Googling every sentence and phrase spoken by Hillary Clinton and other speakers at next week’s Democratic Convention, looking for examples of plagiarism from the other side. But that remains to be seen.

In the real world, it’s perfectly clear big parts of Melania Trump’s speech were lifted, word for word, from Michelle Obama’s 2008 speech. Today the pundits are trying to figure out who did the lifting. Not me. I already figured out who did it.

Remember those phone calls from Trump “spokesmen” who turned out to be Trump himself using fake names? Remember that bizarre testimonial letter from Trump’s “doctor,” who said things like “If elected, Mr. Trump, I can state unequivocally, will be the healthiest individual ever elected to the presidency”?

C’mon, Donald wrote that speech. I don’t think he saw anything wrong with plagiarism … not when he did it, anyway … and if he did, I don’t think he had a high enough opinion of people to think any of us would catch on.

I love it when pundits speculate on why Trump does this or that. Is he playing some kind of long game? Is he manipulating people to achieve some kind of genius goal we cannot fathom? Occam’s razor, people, Occam’s razor. The simplest explanation is the correct one. Everything I’ve seen in my life and career bears this out. What you see is what you get with Trump: he’s not playing the vulgarian buffoon, he is a vulgarian buffoon.

And there is no bottom to how low he’ll go. Mark my words.